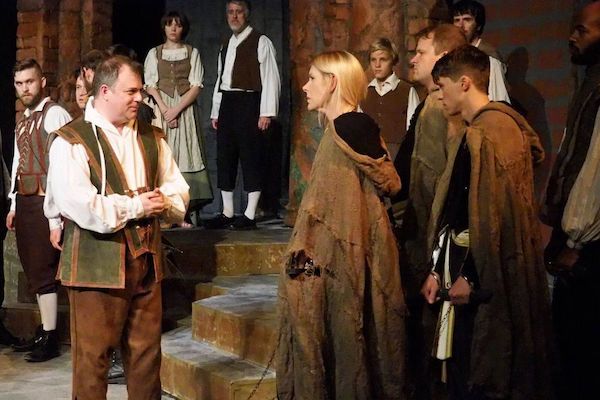 'Titus Andronicus' is a violent yet satisfying exploration of power, pride, and revenge

One of William Shakespeare's earliest plays, as well as his bloodiest, Titus Andronicus is a fast-moving, high body count play filled with anger, strategic manipulation, and unrelenting vengeance. St. Louis Shakespeare's current production, with clear direction from Tom Kopp and a script adaptation by John Wolbers, sharply focuses the complex and darkly tragic play on the intense conflict between the central characters. Bold performances are energized by a sense of rage and a well articulated story arc ensures that this production is exciting. The tension starts high and still finds several levels left to amp up the bloodstained drama.

Roman general Titus Andronicus returns home having defeated the Goths and captured their queen and her sons. After sacrificing the eldest son to the gods, he is offered the mantle of Emperor but defers to Saturninus. He immediately vows to wed Titus' daughter Lavinia, upsetting his brother Bassianus. The new emperor changes his mind, however, as soon as he sees the Goth queen Tamora, deciding to take her as his empress instead. She coyly acquiesces, and instantly begins plotting her revenge. Once the first domino falls, the deadly action continues unabated until nearly all the principle characters have suffered increasingly gruesome deaths.

Suki Peters is viciously protective and unforgiving as Tamora, alternately purring and spitting out her lines as suits her purpose. She easily keeps Roger Erb's blindly ambitious Saturninus under her thumb. Ted Drury and Michael Pierce are callously and gleefully sociopathic as her sons, and Darrious Varner is strikingly brazen as her unrepentant strategist and secret lover Aaron. Chad Little is too self-assured and stubborn for his own good as Titus, and his children pay the price. Britteny Henry, as daughter Lavinia, suffers the most before her death, her pleading facial expressions and haunting eyes convey unbearable pain. Eric Kuhn, as Titus' remaining son, returns to reunite Rome after establish peace and recruiting the Goths to his cause.

The tightened script underscores the brutality of the play, and Kopp's strong, purposeful direction keeps the pace constant and the stakes building. The locations of the show are covered in Winning's well-designed and purposed set, ensuring quick transitions while emphasizing the tragedy closing in on the entire cast. Darren Thompson's lights, Drury's sound, and Kuhn's direction of the violence enhance the tone, and are underscored with pensive incidental music from composer Susan Kopp. Zahrah Agha's costumes create clear designations of tribe and status through contrast. Though they also add a bit of confusion to any attempt to set the undefined period, it doesn't detract from the story a bit. In fact, the parts complement the whole to a visually striking and tension-filled success.

Titus Andronicus is rife with twists and turns in the action as the violence is back and forth between the Romans, Goths, and Andronicus' family. The plotline is clear from the opening moments of the show, when the Goths are marched onto stage chained together and tethered by a heavy beam. As the Romans assert their power, even Shakespeare's language seems to suggest a lack of respect for the prisoners of war. The Bard then skillfully creates a queen who is more ruthless, more determined, and more bloodthirsty than the over-confident men who hold her captive. The audience doesn't dare to take their eyes off of Tamora and her consorts and, though Rome prevails, there's a viciously evil triumph before the eventual fall.

In Titus Andronicus, it is the interpretation of the script and the intensity of commitment to hatred and revenge with no mercy -- and by any means -- that powers the play. The animosity between the Romans and Goths permeates the air, and Tamora's barely contained rage and impenetrable will sears as thoroughly as the sun burns. Strong, motivated performances and careful attention to detail ensures that Titus Andronicus, running through September 3, 2017, is a bloody tragedy well done.