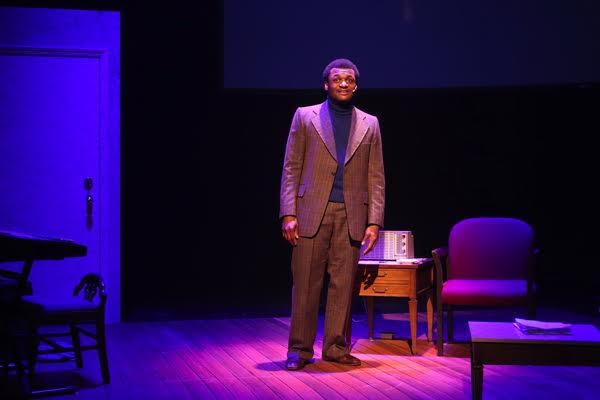 The Black Rep closes its 39th season with Twisted Melodies, a moving exploration of the connection between genius and madness, expertly conveyed in an evocatively personal performance by actor Kelvin Roston, Jr, who also researched and wrote the script. The one man show with music delves into the mind and mental illness of singer songwriter Donnie Hathaway in an affecting, heartbreaking portrayal that's filled with songs, reverence and genuine anguish.

St. Louis native and Vashon High graduate Donnie Hathaway was an extremely talented, rising star in R&B music during the 70s whose career was cut short by his untimely death. A prodigious pianist, Hathaway grew up under his grandmother's roof and tutelage. A strict, Bible-quoting woman with a commanding will, she taught him to play piano and sing gospel. Her insistence that he constantly practice piano seems both an acknowledgement of talent and of her grandson's mental illness. You see, Hathaway was also diagnosed a paranoid schizophrenic. His illness eventually consumed him.

As with many artists, Hathaway found that the medicine he took stifled his creativity and ability to compose music even more than it helped control his symptoms. Though his grandmother did her best to prepare him by providing a grounding point and focus in music, it was not enough to sufficiently shield him, and as he matured, his episodes became increasingly intense and disruptive.

Twisted Melodies takes place in a single day, opening at a studio recording session then quickly moving to Hathaway's small, dingy room in a boarding hotel. The place seems a bit cramped and closed up, perhaps mirroring Hathaway's attempts to keep schizophrenic episodes at bay through rigid order and control. In the course of an evening, we watch and listen as Hathaway tells us of his life and love in between episodes filled with genuine terror and confusion. He frequently speaks to someone in the room that we cannot see, and he seems to see the audience, viewing us as an ensemble of guardian angels sent to help.

An inventive bit of writing, this recognition accentuates Hathaway's loosening grip on reality and is enhanced by the ominous, sometimes angry sound design created by Rick Sims. Having helped develop Twisted Melodies as part of The Black Reps programs to nurture and support artists and original work, Ron Himes directs with certainty and a deep understanding of the story. Roston's performance is gripping -- at times the audience is moved to sing along, at other times they are left to gasp, astonished at Hathaway's complete breakdown and how easily the walls of reality crumble.

The story occasionally gets lost in the performance, and it's not always easy to understand Roston's character transitions. Some work to clarify the exposition would add a strong through line to the show, helping to increase tension and drive to the tragic denouement. Additionally, I found it incredibly disconcerting that the now-deceased character Hathaway returns to the stage for an encore song after the story's end. Roston fully commits to his character and performance, however, and largely succeeds in taking the audience inside the artist's troubled mind. He deftly embodies both the genius and madness, using his voice, slight ticks, and changes in posture to transition as his mind grapples with lucidity. At times inspired, at times violently paranoid, and sometimes frightening, we see the ugly and overwhelming power mental illness can hold over a person.

Thankfully, there are moments of genuine beauty between the madness as we get stirring, passionate versions of Hathaway's most popular hits, as well as some gospel and a touch of Roberta Flack. Roston delivers strong renditions and has his curation of music suits the theme and emotional tenor of the show. His voice is evocative and reminiscent of Hathaway, and he fills the theater with emotion and presence.

Talent brought Hathaway a bit of fame and fortune, but it was not enough to overcome his mental illness. His story is artfully and respectfully detailed by The Black Rep in Twisted Melodies, running through May 1 in Washington University's Edison Theater.