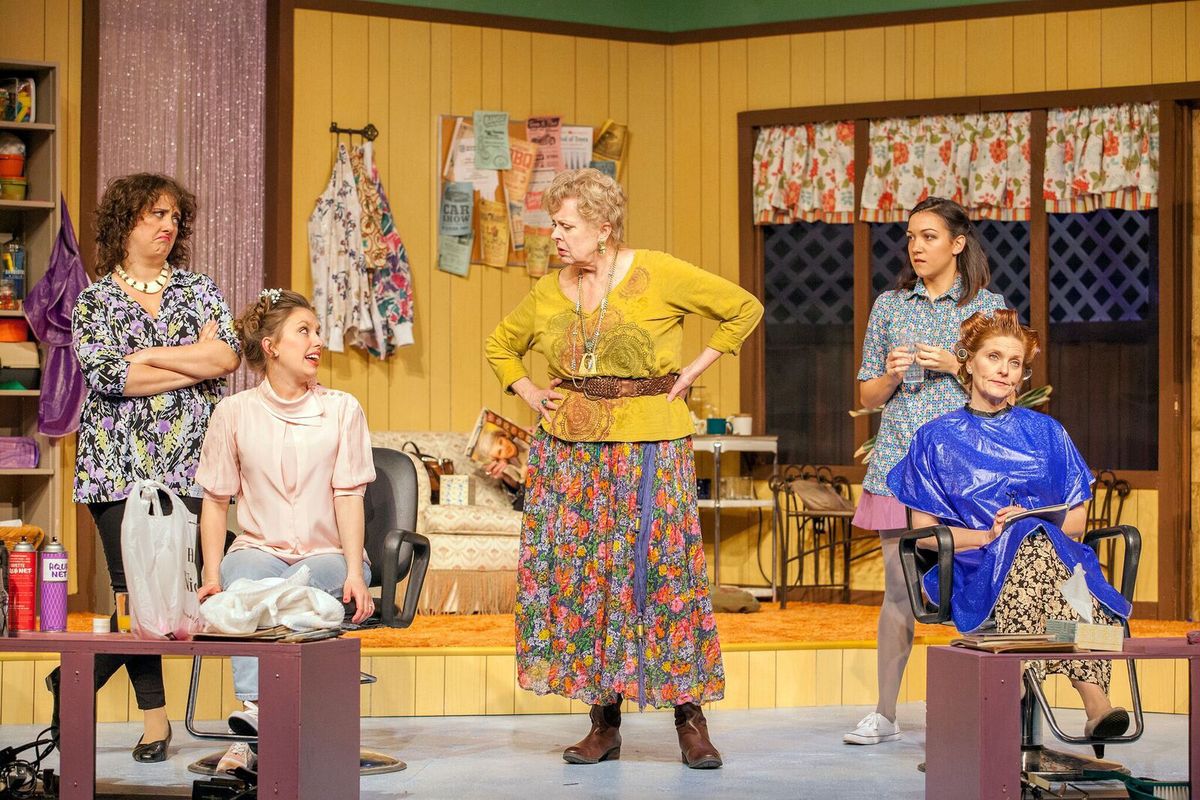 ‘Steel Magnolias’ sparkles with friendship and shines with strength, laughter, and kindness

Steel Magnolias, Robert Harling’s moving tribute to his late sister, is an emotionally packed drama that explores parental love, the desire to live life to its fullest, and the importance of friendship. Told by a bevy of strong southern women, the story is heartbreakingly sad in moments but resonates with warmth and love as well as the resilience of the human spirit. Stray Dog Theatre’s compelling interpretation brings the story to life with quirky but relatable characters and an inspiring lead that refuses to let illness dampen her dreams.

Truvy, a bubbly salon owner who espouses there’s no such thing as natural beauty, has just hired Annelle, a reticent young woman with a mysterious past, to help out at the shop and it didn’t happen a moment too soon. Shelby is about to get married and the whole town is all-abuzz with excitement, particularly the ladies who frequent Truvy’s salon. Soon enough, Shelby and her mother, M’Lynn, arrive for their appointments. There’s a constant flow of gossip, snark, and friendly advice as the stylists wash, set, curl, and fix each woman’s hair. We learn about Ouiser’s feud with Shelby’s father, Clairee’s opinion of the new mayor’s wife, the one that replaced her. We also learn that Shelby has a serious illness and shouldn’t have children, a fact she resists and her mother worries over.

As the story progresses, the audience is invited into the intimate circle of friends. Truvy remains a steady force, cracking jokes and teasing hair, but the others undergo significant changes during the two-year span of the bittersweet play. Clairee and Ouiser each find a new and very different lease on life. Annelle finds religion, as well as her self-respect and real love. Shelby faces daunting odds at every turn, but she so frequently succeeds that it causes us to drop our guard, making the final scene hurt that much more, so we shed a tear or two over the miracles and tragedies that life doles out. The story arc is serious, but gentle, delivered with tender regard and a sense of humor

Eileen Engel fills Shelby with a spirited, passionate demeanor that demands we pay attention from the moment she enters the room and encourages us to believe for her. Engel finds multiple layers in Shelby, even her optimism is tinged with complexity, and there’s resolve and sincerity in her portrayal that charms. In contrast, Alison Linderer starts small and quiet, the wallflower in the corner that blossoms into a kind, nurturing woman. She’s the perfect partner to Truvy’s over-the-top energy and represents the youthful energy the friends need to maintain hope.

Jenni Ryan unravels M’Lynn slowly, revealing carefully masked layers of maternal pain and fear that feel heartbreakingly honest. She is by turns anxious and supportive, but she’s willing to give everything she has to help her daughter stay alive. Sarah Gene Dowling is boundless and bawdy as Truvy, her hands and mouth constantly working in concert. Liz Mischel and Andra Harkins round out the cast as Clairee and Ouiser, two wonderfully vivacious and bickering senior citizens with hearts of gold. Accents were lost a few times here and there, and more than one actress appeared to stumble over a few lines, but the spirit of the show remained intact throughout. The chemistry and sense of camaraderie are present from the opening scene and the women’s relationships feel genuine, down to the little squabbles and too familiar teasing.

Director Gary F. Bell steers the show purposefully, creating well-developed characters that, for the most part, avoid stereotypes, though Truvy and Annelle are not as substantial as the other women. The lack of depth may reflect more on the script than the actors, but more levels and vocal variety may also add depth to the one-note characters. Josh Smith’s set is a wonderful recreation of a small town beauty parlor, complete with running water and hooded dryers, while the sound design set the tone of the show with catchy pop tunes from the 1980s. Finally, Bell and Engel’s costumes and hairstyles capture the period, with the liberal application of hairspray a perfect finishing touch.

The impact of the powerful play, filled with witty observations and sly jokes as well as tender scolding and long hugs, sneaks up on the audience. Despite all the challenges these women face, they remain optimistic and long for a better tomorrow not simply for themselves, but for their friends. Even when they quarrel, they do so with real affection and interest. Though there’s a wedding, there’s not a happy ending for all; still, Steel Magnolias, in performance through December 16 at Stray Dog Theatre, offers friendship, comfort, and hope with a healthy dose of humor.