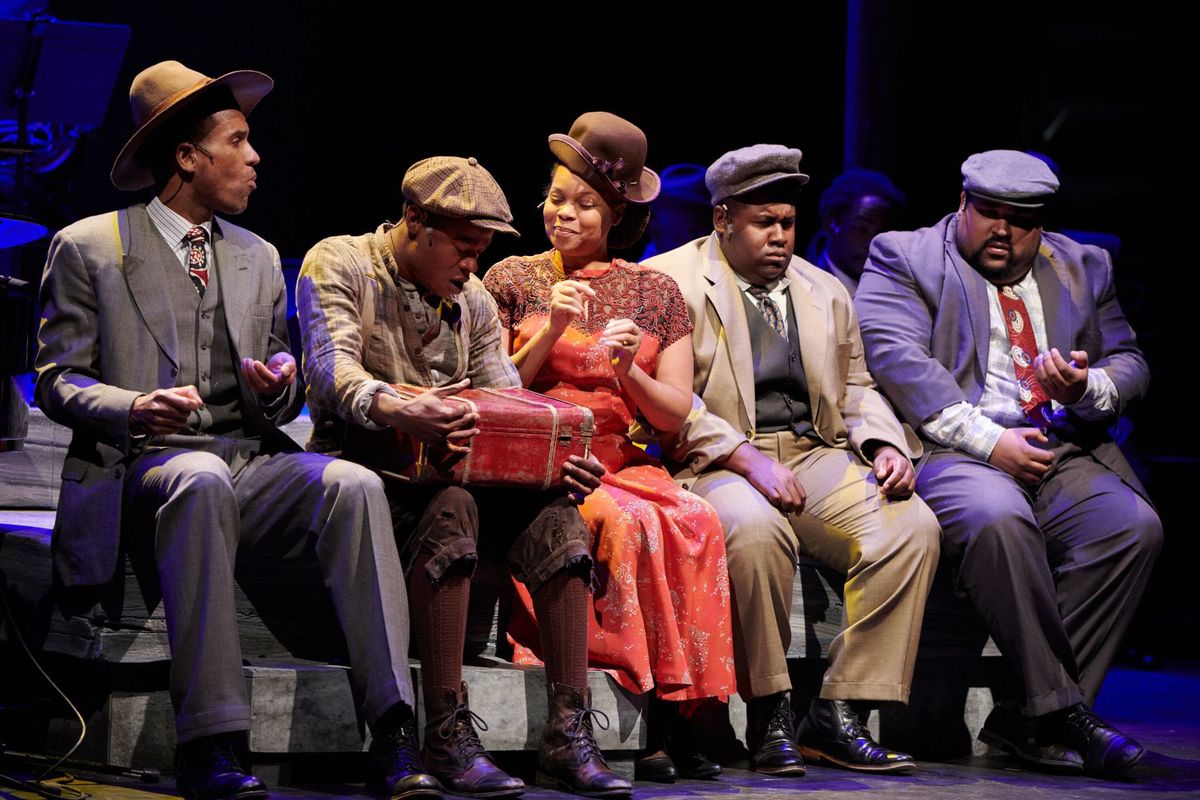 Metro Theater Company partners with Jazz St. Louis to present a music-infused adaptation of Christopher Paul Curtis’ prize-winning children’s book Bud, Not Buddy. Bud, a young black boy, has lost his mother and grown tired of the foster system so he sets off to seek out the man he believes is his father, band leader Herman Calloway. His adventure is engaging, with examples of life, social structure, and music in the 1930s and a lively supporting cast that helps to create a vibrant, exciting story.

Myke Andrews gives Bud an eager, curious, and quite brave disposition, as well as a healthy dose of optimism. Constantly experiencing the world with wide-eyed enthusiasm, he just wants to find the place that feels like home again. Andrews speaks for Bud, but Carl Overly, Jr., Reginald Pierre, Antony Terrell, and Chris Ware often voice the boy’s inner thoughts, with pitch perfect intonation. Each actor brings a different aspect of Bud’s personality and fears, resulting in a tapestry woven from various influences and perspectives.

The four actors and Nicholas Kryah also form Calloway’s band – although a live thirteen-piece combo positioned at the back of the stage provides actual live musical accompaniment. Don McClendon is gruff but kind as Calloway, he’s skeptical of Bud’s claims but not mean spirited. At Miss Thomas’ urging he allows Bud to stay in the home the band shares until the boy’s story can be checked out. He eventually opens up to Bud in a satisfying scene that reveals their true relationship.

FeliceSkye Hutchinson is warm and nurturing as Miss Thomas, adding a grounded, comforting element to the ensemble. She welcomes the boy unconditionally and provides the opening for Bud and Calloway to eventually connect as family. Her immediate concern for Bud ensures he has a good meal and a place to stay while his story is checked out. McClendon and Hutchinson’s more cautious approach provides a satisfying contrast to the band’s open embrace of the kid, reflecting the often conflicted yet very human responses society shows to orphaned children and the foster care system.

Bud, Not Buddy, infuses its story with elements of the artistic approach that defines jazz. Ideas of structure, repetition of form, and improvisation create a layered effect that helps Bud tell his story while introducing multiple perspectives, both personal and historic. Under the direction of Phil Dunlap, on the piano, the large band is at times a character itself. A musical call and response is suggested, emphasizing the themes and period as well as providing satisfying punctuation to many scenes. In addition to Dunlap, the ensemble includes talented local musicians Ben Wheeler, Kevin Gianino, Anthony Peterson, Daniel Campbell, Cody Henry, Steve Lawson, Carole Lemire, Kwanae Johnson, Jeffrey Collins, Derick Tramel, Ben Reece, and Mark Overton.

Metro Theater employs a nearly bare stage, keeping the focus on the character’s and Bud’s journey by enabling constant movement. The actors use props to create a dining table, cars, and any other furniture or set pieces they need, and strong choreography ensures that even the assembly of scenes flows naturally and supports the story. Lou Bird’s detailed costumes, Meg Brinkley’s props, and a scenic design by David Blake that includes numerous projections define the era and locations. Mood is set and tone shifted with Rusty Wandall’s sound and Sean Savoie’s lighting, which perfectly complements the show’s pace and musical score. The cumulative effect is an evocative piece with a hopeful, optimistic tone.

The show moves quickly from location to location as Bud relates his experiences with a foster family and his decision to set out on his own. A few faded show posters for Calloway’s band and personal mementos, including some rocks and an important photo of his mom, are all the possessions Bud owns. Calloway has a long habit of collecting and marking rocks from the various towns the band visits. When Bud tells Calloway he has rocks “just like his,” the older man first responds with suspicion and thinly veiled disbelief. The importance of this scene builds slowly and then resonates throughout the audience. It’s one of the moments that show the structure and craft that went into adapting the popular book for the stage.

Metro Theater Company’s Bud, Not Buddy, continuing through February 25 at the Grandel Theatre, mixes history, life lessons, and music into a feel-good story. Our hero Bud shows courage, perseverance, intelligence, and a commitment to finding his place in life, lessons that are reinforced through the action and other characters. The actors and band work together seamlessly, resulting in a playful, family-friendly production that holds plenty of interest for audiences of all ages.