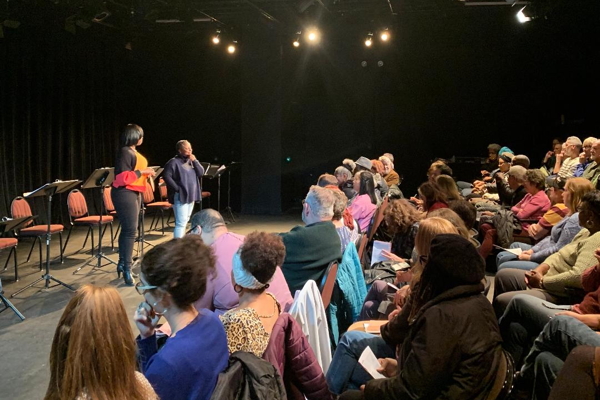 Virginia Woolf famously suggested that women writers -- and all writers -- need a space in which to work. Without that space, the focus necessary for creation cannot occur, Woolf wrote. Likewise, for playwrights, writing scripts without an opportunity to see one's words performed leaves out an essential aspect of theatre creation. The Confluence New Play Festival at the Shakespeare Festival St. Louis provided regional playwrights that necessary resource.

The first annual “Confluence New Play Festival” took place from November 20 - 23, 2019 at the Kranzberg Arts Center. Each of the four evenings featured a different new script by the four playwrights selected for the inaugural Confluence Regional Writers Project. The festival itself was the culmination of a year's worth of work. After being selected in Fall 2018, the four playwrights -- Master Playwright Carter W. Lewis and Emerging Playwrights Shualee Cook, Kristin Idaszak, and Mariah L. Richardson -- had an initial writers' retreat, and then met monthly to workshop scenes from brand new plays in progress. After a year of workshops, the playwrights turned their scripts over to the Confluence Regional Writers Project Director, Nancy Bell, who produced the staged readings that were on offer to the public as the Confluence New Play Festival.

Entering the lobby of the Kranzberg Arts Center each evening for the Confluence New Play Festival, one was met with a large crowd. Several readings were at capacity with late-arriving audience members scrambling to find seats, showing that there is a strong desire for new plays in St. Louis. And, while there are other new play development festivals in St. Louis such as the Rep's “Ignite!”, the Confluence New Play Festival filled an important gap because it focused on regional new plays. “Ignite!” is an extremely effective program, but it specifically brings national talent to St. Louis, whereas the Confluence New Play Festival successfully nurtures talent from Missouri and Illinois. And, from the capacity crowds and enthusiastic reception each script received, there is an audience in St. Louis ready to hear from local voices.

Tom Ridgely, the Producing Artistic Director of The Shakespeare Festival St. Louis since May 2018, suggested the idea of giving space to local voices is at the heart of the Confluence Regional Writers Project. He introduced the Confluence New Play Festival by stating the importance of new plays from the region. Without them, Ridgley said, a large swath of the country does not see themselves or their stories on the American stage. The Program's Director, Nancy Bell, has an “if you build it, they will come” attitude regarding a St. Louis playwriting scene. To her, St. Louis has all the necessary building blocks for an amazing new play environment -- great actors, directors, and designers -- and the Confluence Regional Writers Project is her attempt to bring playwrights into that mix.

The festival itself was four staged readings of the playwrights' new plays. A staged reading is a way for playwrights and audiences to get a sense of a play without committing to a full production. Actors, who have rehearsed and worked with a director and the playwright, stand at music stands and act out the play without sets, props, lights. An actor reads stage directions to get across those design elements. This type of performance enables a playwright to hear the words out loud, but, more importantly, it permits playwrights to see and hear how spectators respond to the script. And, with good directors and actors, staged readings can be thrilling in themselves, and truly whet the appetite to see scripts in full productions. That was the case with the four scripts performed in the Confluence New Play Festival.

All the artists involved in the staged readings were extremely effective. First, they were directed by a who's who of St. Louis: Tom Martin (artistic associate at Shakespeare Festival St. Louis), Jacqueline Thompson (2019 Emerging Artist Award by St. Louis Visionary Awards), Deanna Jent (Artistic Director of Mustard Seed Theatre), and Lucy Cashion (Artistic Director of ERA Theatre). Next, all the actors gave strong performances; there was no weak link over the course of four evenings. That said, particularly attention has to be paid to Nancy Bell who not only created the Confluence Regional Writers Project, not only produced the Confluence New Play Festival, but also performed with great aplomb in three of four readings! It is safe to say that Bell was the powerhouse behind the success of this festival.

Because the plays were still in development, it would not be appropriate to review them beyond a brief synopsis. The festival's first reading was “The Story Blinked” by Carter W. Lewis, directed by Tom Martin. The script followed the characters in an H.G. Wells story as the protagonist tries to change the ending. The next night, the festival presented “Suffer the Children,” written by Mariah L. Richardson and directed by Jacqueline Thompson. This topical script focused on a high school on lock-down and surrounded by a swat team, bringing out the fears and beliefs of the characters. The following evening, “And Certain Women” written by Shualee Cook and directed by Deanna Jent was offered. This script was a hilarious and moving retelling of the New Testament from the point of view of the women who ran the logistics necessary for Jesus's journeys and teachings. Finally, the festival closed with a new script by Chicago playwright Kristin Idaszak, “Tidy: A Play About Mass Extinction,” directed by Lucy Cashion. This one-person show was set in an urban apartment sometime in the future and, over the course of ninety-minutes, the person cleans up her apartment's clutter and unravels a mystery about the potential end of the world.

This first annual Confluence New Play Festival was a resounding success. The productions utilized diverse actors, in terms of age, ethnicity, and gender. The directors -- also quite diverse -- did a great job of showcasing the scripts while inspiring impressive performances from their casts. The scripts and playwrights were extremely varied and illustrated the variety of stories available to writers in the region.

Altogether, the “Confluence New Play Festival” was a vital new festival for regional playwrights. The 2020 cohort is already chosen -- Elizabeth Archer (Chicago, IL), Myah L. Gary (Carbondale, IL -- and, full disclosure, one of my graduate students at SIUC), and Rob Maesaka (St. Louis, MO). I am excited to see what next year's festival holds, and to see how regional playwriting might grow in St. Louis thanks to programs like the Confluence Regional Writers Project.