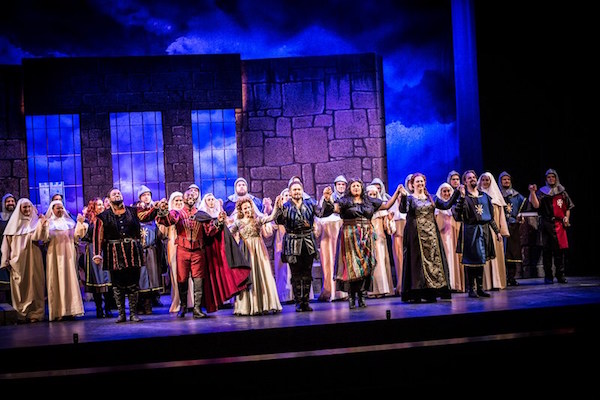 High passion and sheer unrestrained melodrama overflow in Verdi's Il Trovatore, the current offering by Winter Opera St. Louis. And the voices are glorious! Once again Winter Opera has assembled a sterling group of singers. Caruso once said that all it takes for a successful performance of Trovatore is the four greatest singers in the world. I'm not sure if the judges' ballots are all in yet, but the singers of the four principal roles in this production would seem to be right up there among the finalists.

It's 1412. We find ourselves in Zaragosa in the Kingdom of Aragon. Civil War rages. And a romantic contest rages too. The beautiful Leonora is beloved by two men--the royalist Count di Luna and the rebel Manrico. (SPOILER ALERT: Di Luna is a baritone and Manrico a tenor so you know right off which one is the good guy.) Leonora is in love with the good guy -- but she thinks he was killed in battle. Then who is that mysterious troubadour who continually serenades her with his lute -- from the moonlit garden beneath her window? Right! It's Manrico, who isn't really dead at all.

Di Luna is in such a lather over Leonora that he'd do anything -- certainly kill some piddling troubadour -- to attain the lady of his lust.

But wait, wait! There's a back-story! When di Luna was a mere boy his father burned a gypsy woman as a witch for cursing his new infant son. In revenge the gypsy's daughter stole the new babe and (maybe?) burned it. (I said melodrama, didn't I?)

Well, there's a sword-fight and Manrico's wounds are tended by his gypsy mother (Azucena, an amazing creature). Leonora, once again thinking her lover dead, is about to join a nunnery when both of her lovers come to her rescue. Escape! Battle! Capture! Imprisonment! Finally the noble Leonora offers herself to di Luna in exchange for Manrico's freedom. But -- since to her di Luna is a fate worse than death -- she gives herself a dose from her poison-ring; it is, of course, slow-acting enough to allow her to get in those final marvelous arias. When di Luna realizes he's been thwarted he executes Manrico -- only to have Azucena tell him that he has just killed his brother.

Melodrama! Folks used to eat that stuff up. To a modern ear it all sounds better in Italian.

And such a sound! When it opened in 1853 Il Trovatore was a popular if not critical success. But it has since grown in esteem to become the 20th most frequently produced opera in the world. It's been called "the apotheosis of Bel Canto."

Neil Nelson exudes power in the role of Count di Luna. He wields a strong and pure baritone that can fill the hall. Tenor Jorge Pita Carreras sings Manrico, and he's every bit a vocal match for his nemesis di Luna. Carreras makes an ardent, passionate hero, and he makes for a heavenly duet with Leonora.

But it is Maria Kanyova as Leonora who captures this show and makes it hers. It is she who masters the difficult beauty of Bel Canto in aria after aria -- the precisely articulated staccatos, the velvet glissandos, that smooth decrescendo down to a whisper! Her beautiful trilled "R"s are utterly sensual. She's amazing. And the lady can act! She has the instinct to carry focus, to make a beautiful stage picture, to fill any little pause with meaning. She's in subtle command of every scene. In a small, slim body she absolutely towers!

But let's not forget the role that Verdi particularly loved. Let's not forget the gypsy mother, Azucena. In this role we have Claudia Chapa. She's a powerful mezzo-soprano with a gift for the intense drama that this story so strongly requires. Brava to her!

I always say that the difference between a good production and a great one lies in a company's ability to fill even the smaller roles with top talent. Here we have beautiful work by Sharon Sullivan as Leonora's confidante Ines, by Clark Sturdevant as the rebel captain Ruiz, and by Antoine Hodge as the royalist captain Ferrando. (I was told that Mr. Hodge had been battling a throat ailment all week. If what I heard last night was his gimpy voice then his healthy voice must be a wonder indeed.)

Scenic designer Scott Loebl again works wonders. He manages Verdi's [eight] different sets with great agility. The castle di Luna is instantly, magically transformed into a moonlit formal garden; the gypsy camp swiftly becomes a convent. And behind it all is a quite gorgeous, vast cloud-scape that changes dramatically with the mood of the scene. In one scene we see a distant castle fortress in a soft romantic glow. Excellent work by lighting designer Sean Savoie. (And excellent work by his follow-spot operators.)

Stage director Mark Freiman manages the large cast well, though there were moments in instrumental passages where the singers were merely waiting for their next cue. (This never happened in scenes with Leonora and Manrico, who both knew how to fill such gaps with meaningful, natural movement.) The chorus scenes -- with all those soldiers -- wanted a bit more attention to detail, and those lovely gypsy girls with tambourines and their sweeping, flowing skirts simply screamed for some real dancing in the "Anvil Chorus" scene.

Congratulations to music director Darwin Aquino, who brought this all together in a manner to do justice to Verdi.

It's a terrific evening of very fine opera at Winter Theatre. It's Verdi's Il Trovatore.