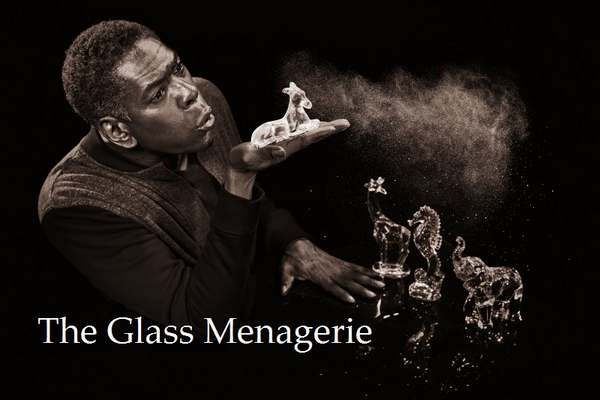 Upstream Theater's 'Glass Menagerie' at the Kranzberg through May 15

Upstream Theater, under the direction of Philip Boehm, is my favorite company in town. Since 2005 they have been our only company to concentrate on world theater. They've brought us twenty-one U.S. premieres plus another eleven rarely-produced plays -- almost all from foreign sources. Yes, an occasional classic -- an Oedipus, an Antigone, a Blood Wedding -- but those, too, are rarely produced. Only once before, I think, has Upstream offered a work by a famous American playwright; that was The Hairy Ape -- certainly one of O'Neill's least produced plays.

What in the world were they doing when they announced a season including a play that is one of the most familiar of all pieces ever to bless the American stage? The Glass Menagerie is without doubt a very great play. It is perhaps the very greatest of all American plays. But it's been done everywhere! It is so far outside Upstream's charter!?

But theater is to make you think. This production is extraordinary. It is certainly not a Glass Menagerie that you have ever seen before. Director Philip Boehm has taken risks. (Brave? Foolhardy?) In some aspects this production is unsuccessful, but overall it is most memorable. My wife and I talked about it late into the night. And the next morning we woke up talking about it -- talking, thinking, analyzing, evaluating all that this production offered. So, no two ways about it, this production was -- overall -- very successful theater. And it impressed us all the more with the beauty of Tennessee Williams' work.

First of all, in this production Amanda (the mother) and Tom (her son) are black. Linda Kennedy and J. Samuel Davis are familiar veterans on St. Louis stages; they've both done superb work for years. I would suggest that here, in Glass Menagerie, these two are exhibiting their "personal best."

But I am not one to whom race can be meaningless in theater. Every actor carries in his face a rich cargo of ethnicity. There are, of course, many roles and plays in which race is quite immaterial. Williams, however, sets Glass Menagerie very specifically in St. Louis in 1937 or 1938 -- a time and place when race was far from inconsequential. Kennedy and Davis -- in voice and manner -- portray the Wingfields as a very typical -- almost essential -- black lower-middle-class family. I was amazed at how totally at home Tennessee Williams' dialogue seemed to be in these black voices. It was almost as if he had written the play for a black family. Credit for this is surely due to the actors.

But there are those textual references -- Amanda's initiation into the D.A.R., and her reminiscences of her youth: "All of my gentlemen callers were sons of planters and so of course I assumed that I would be married to one and raise my family on a large piece of land with plenty of servants."

These almost antebellum dreams may indeed be mere fantasies of Amanda -- but they are not black fantasies. We all know what "antebellum" meant to black America.

And then there is the white daughter. Laura is played by the lovely blonde and alabaster-skinned Sydney Frasure. She speaks with a voice quite unlike that of her mother and brother. What are we to make of this? I guess we must simply ignore the differences

Miss Frasure is, in real life, wheel-chair-bound and has some manual limitations. Maneuvering the antique wheel-chair around the small stage at the Kranzberg poses significant logistical problems -- not all of which are comfortably resolved, and when Jim, the "gentleman caller," dances with Laura it is indeed problematical. But when Jim's easy sweet kindness lifts Laura out of her intense shyness the utter radiance shining from Miss Frasure's beautiful face makes us forget all of those difficulties. Jim's hesitant kiss gives Laura a later lifetime of sweet memory.

In a striking, unusual, and wonderfully effective device Mr. Davis (and Mr. Boehm) give us a Tom who is remembering from a very old age. In all of his "narrator" passages Tom is seen as an old, old man. He moves with a walker--and with that slightly-vacant wide-eyed gaze of the ancient. Davis, who must be in his 50's, so convincingly portrays the movements and posture of the aged! At these moments, when Davis is looking directly at you in the audience, he is utterly captivating! You cannot look away! And then, magically, when he steps into a family scene he instantly becomes young. It's quite wonderful.

Linda Kennedy gives us an Amanda full of life and vitality and often a warm, happy heart. In her strivings with her son she shows "sass" and "attitude." This Amanda is unquestionably sane -- not even neurotic. She's merely a mother who simply cannot stop talking and poking and prying into the lives of her children. She's irritating, yes, but she's surely not an unfamiliar, let alone a contemptible, mother. In her interaction with her children there is indeed frustration, but ever-so clearly there is also great love.

This is what I felt so strongly -- in contrast to so many productions of "Glass Menagerie." I felt the strong love between mother and son. And I've never, never felt such a strong and tender love between Tom and his sister Laura as when Davis and Miss Frasure nuzzle their heads together over the desk in this production.
The Gentleman Caller, Jim, is a role a little too nice to be true. He's just so full of Dale Carnegie and "positive thought." Jason Contini does him great justice. (Though I think that a moustache robs him of a bit of his very desirable innocence.)

So: How does the lively warmth of this family effect the drama? Does the real vitality of this Amanda diminish the tragedy of her abandonment? Tom, in the script is younger than Laura, but in this production he is clearly older. Is his abandonment of this slight, deeply dependent Laura in any way forgivable? Here we see Tom as a very old man remembering; he has clearly reached the end of his life journey. Should not Tom, perhaps, be still journeying? Seeking? Certainly Tennessee Williams was in quest till the very end.

The beautifully detailed set is by Michael Heil. It's properly shabby, and filled with muted earth tones. A striking image of a fire-escape serves as backdrop. Claudia Horn is responsible for all the perfect, period properties.

The evening is supported by lovely live piano music by Joe Dreyer -- gentle old parlor ballads as if from Laura's phonograph, light and crystalline -- or livelier dance tunes from the Paradise Dance Hall across the street.

The Upstream production of The Glass Menagerie will leave you wondering about many things. But that's good! Do see it. It's well worth your time.
It continues Thursdays through Sundays through May 15th at the Kranzberg Arts Center.