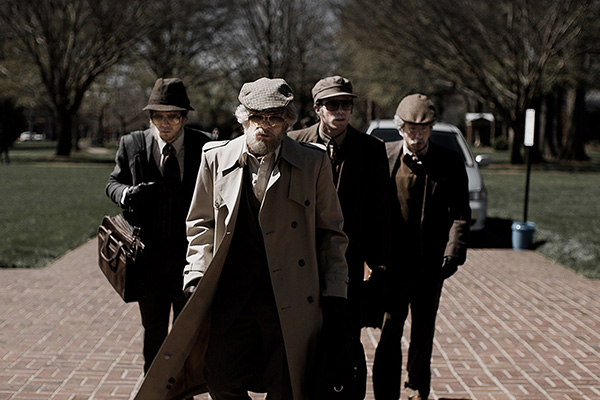 After a quotation from Charles Darwin's "On the Origin of Species" that gives the film its title, we read, "This is not based on a true story. This is a true story." Not only is it, but the four perpetrators involved in this crazy 2004 thievery appear in interviews intercut with the actors portraying them. They toss imprecise memories back and forth, revise and revisit scenes passing props from one interpretation to another. Here's the setup, with no spoilers because "American Animals" offers one fabulous, unpredictable ride I wouldn't spoil. Transylvanian University student Spencer Reinhard, with hopes of a career as an artist, hatches the grand scheme to steal the library's rare, first edition of John James Audubon's "Illustrated Birds of America," worth an estimated $12 million.

Soon he and good friend Warren Lipka are googling, yes, googling, "how to execute the perfect bank robbery" and studying their collection of heist movies they will then imitate to the best and worst of their abilities. In short order, a quartet of friends: Spencer, Warren, Eric Borsuk and "Chas" Allen II are donning disguises, making blueprint diagrams of the special collections room, building miniature models and training binoculars on the library – all leading up to the all-important day of the robbery.

Director/writer Bart Layton delivers a snappy, delightfully imaginative film, reinterpreting and redefining the genre. At Columbia, Missouri's True/False festival where I first saw "American Animals," Layton said he wanted us to get into the fun of the fantasy, but also to show how these individuals got lost in an agony of chaos. Shot by Ole Bratt Birkeland with energetic, distinctive styles for each critical event, the lighting darkens as the mood changes. (See the June 2018 American Cinematographer for a descriptive article on the film's production.) The pace quickens at decisive moments and the skilled actors' interaction pops. "American Animals" is unique and highly entertaining. At Landmark's Tivoli Cinema.