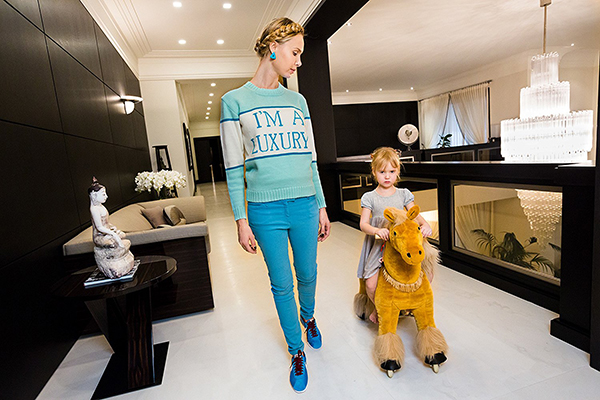 Filmgoers may remember director Lauren Greenfield from her 2012 documentary "Queen of Versailles." That film followed the Siegels, a couple hellbent on building a mansion based on Versailles and financed on the real estate bubble. Greenfield's current, instructive documentary continues to gaze at the navels of the rich.

But with "Generation Wealth," Greenfield includes herself and her children and her parents in her sweeping gaze. She recognized her own obsession, through her films' topics, with wealth and status. So she considers her own privilege and studies it as if she were a stranger subject to inspection, here, societies and how they accrue their greatest wealth just before the death of that society, to wit, the crash of 2008.

Greenfield begins with biography, how and when she got interested in wealth acquisition and management. She goes back to writer Bret Easton Ellis as a source. Then, she interviews her Harvard-educated parents and her stressed sons. Soon, she is admitting, off camera, that she felt abandoned by her anthropologist mother, off doing field work, much as Greenfield went off to film. Her mother meets this admission with embarrassed laughter.

In fact, many of Greenfield's subjects laugh in embarrassment and say the most shocking things. That includes the hedge-fund magnate wearing bravado and crucifixes; the woman sculpted by too much plastic surgery and, thus, debt; the woman successful at business but not so much at marriage and family – to the tune of half-a-dozen sessions of in-vitro fertilization at thousands of dollars each. One black man had boasted of the millions he hoped to pile up in a film years ago; in this one, he admits he just wants a college education and happiness for each of his children. Greenfield travels around America and to China and Russia for subjects.

In fact, interviewing her subjects after their bubbles burst says the most in Greenfield's taut documentary about Generation Wealth. It is painful and unsparing and very revealing.