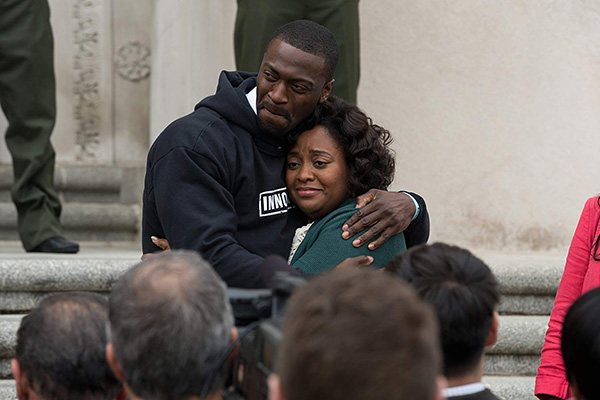 By telling the story of one innocent man exonerated, this biopic educates film-goers about the daunting and rewarding work of the California Innocence Project and its sisters across the country. "Brian Banks" satisfies viewers' needs to know about quiet heroes, in and out of the juvenile court, on and off the football field.

Brian Banks is a quiet hero. He was a stellar football player at Long Beach City College, fit and ready to move up to the NFL. Then in 2002, he was punctured by an accusation of rape. He was innocent, but he took a plea when his lawyer promised that he could avoid a sentence in prison. Banks went to prison for 6 years. He even was stuffed into solitary. A mentor in prison taught Banks that he could not control events, only his reaction to them.

That turned the young man around, slowly. Once on probation and with that GPS device embracing his ankle, Banks appealed to Justin Brooks, founder of the California Innocence Project, to clear his name. A vindicated Banks went on to play football for the Atlanta Falcons.

Aldis Hodge, from "Straight Outta Compton" and "Hidden Figures," energizes the title role. He is ably supported by Sherri Shepherd as his devoted mother (you know, the Octavia Spencer role). He is paired well with Greg Kinnear as the redoubtable Justin Brooks. Kinnear does not steel Hodge's thunder but plays in the ensemble that includes an uncredited Morgan Freeman (you know, the Morgan Freeman role) as the mentor. Monique Grant and Xosha Roquemore play mother and daughter so well that they barely seem to be acting.

Director Tom Shadyac ably intersects flashbacks to "that day" with courtroom scenes. Doug Atchison's script balances exposition with narration well, no easy task here. Stay for the credits paired with pictures of the innocent individuals freed by the work of the California Innocence Project. "Brian Banks" tells but one story of our broken system of justice, and it tells it very well.