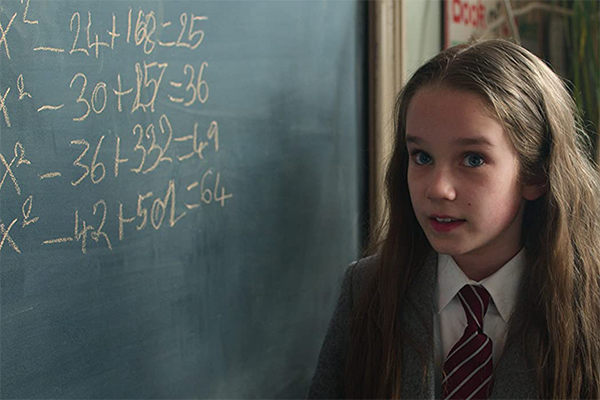 The odd title of this welcome film encourages you never to forget that "Matilda the Musical" originated in the mind of British novelist and fighter ace, Roald Dahl. "The Musical" part of the title elicits memory that this version of Dahl's story stems from Tim Minchin's imagination for a staged version. The film version benefits from Matthew Warchus's direction and Dennis Kelly's pen.

Warchus directed the marvelous movie "Pride" and Kelly wrote the script for 2021's "Together." They lift "Matilda" off Dahl's page and Minchin's stage as they retain the basic plot about Matilda Wormwood, played so convincingly by Alisha Weir. She's bright. She's brave. She fights injustice. She was born to two dolts (Stephen Graham and Andrea Riseborough), who are 25-watt criminals.

They don't homeschool Matilda so much as they leave her to read. "Reading is like a hobby in your head," she says as she holds out her treasured library: Jane Eyre, Moby Dick, Cat in the Hat. Matilda's hobby is finessed by sweet librarian Mrs. Phelps (Sindhu Vee), who declares, "Stories are my business." The Wormwoods finally allow brilliant Matilda to go to school. The headmistress, her mouth an inverted C, is Agatha Trunchbull, who calls children "squits," "maggots," and "twits." The role, usually played in the musical by a man, is taken here by Emma Thompson, so brave herself in last year's "Good Luck to You, Leo Grande." Thompson's best number is a patter song, á la Gilbert and Sullivan, and her best costume is a gym suit with suspenders looking like parentheses around her "badoongs."

Trunchbull's bullying is blessedly balanced by Matilda's teacher, Miss Honey, played by Lashana Lynch, currently in "The Woman King." Snaking through Dahl's plot is a story of a mythic escapologist that Matilda makes up. Or does she? Snaking through "Roald Dahl's Matilda the Musical" is music, but no one great song. The musical opens delightfully in a nursery with singing babies; the other song worth caroling is "When I Grow Up," but this is not a musical that leaps to the Top 40. These songs further the story, which, being Dahl's, descends to the horror of abuse addressed by one intrepid, imaginative child. Matilda, whether in a book or on a stage or screen, is a role model for children dealing with bullies: As Mrs. Phelps says, "Tell someone. Straight away. [Bullies] thrive on ... silence." "Roald Dahl's Matilda the Musical" thrives on color, song and dance, impressive acting, and cunning camera work.