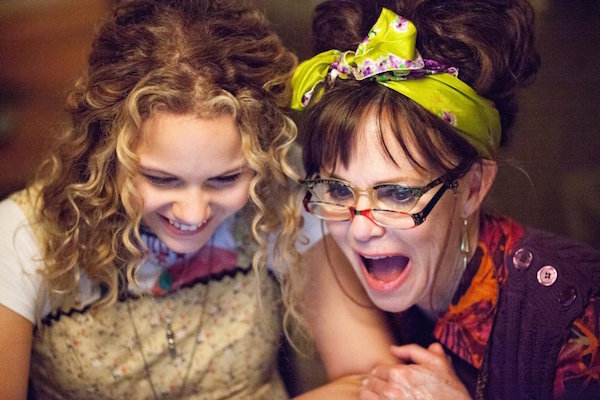 Even though you dread seeing Hello, My Name Is Doris from the moment you see the ads and the trailer, you might go, hoping that cooler heads will prevail. They did not. The occasional laugh vomiting forth, does not make up for the downgrading of women of any age.

The writers, director Michael Showalter and Laura Terruso, may have had a good embryo. They may have thought that a film about a woman stunted in life by caring for her mother and working a job no one cares whether she does. They may have thought that watching her come out of her cocoon, getting therapy, finding happiness in a younger man who pays a tad of attention to her, may have been an interesting story. And it may have been if they had not been so hellbent on making Doris so pathetic.

It starts with the outfits, as the star Sally Field has said in interviews. Once she fluffed Doris' hair with a fall and a scarf, she had her. But the outfits just make Doris look pathetic. Add to that the hoarding she does, not wanting to throw away sentimental belongings, shoves the character toward loopy. Placing her in the midst of a family that wants to change and control her gives Stephen Root and Wendy McLendon-Covey a chance to play-act superficially, but they don't help -- not the characters, not the actors. Ditto Beth Behrs and Max Greenfield. Greenfield never rises to the role of the young man intrigued by the older woman; he's not hurtful but he's not believable either. Tyne Daly, as Doris' friend, outshines everyone. Field throws herself into Doris' tantrums but spends more time being fussy-mousy. The script does not support the moments of growth the character aspires to sporadically.

You're left with a largely unfunny movie about a sad sack woman. And where's the good in that?