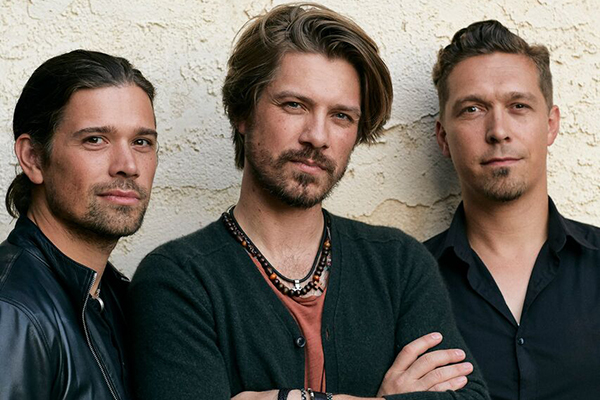 Issac Hanson on 25 years of making music, fighting with his brothers and Hanson's new orchestral album

It's hard to believe that it has been over 25 years since a trio of fresh-faced young brothers, then ages 16, 14 and 11, were launched into super-stardom with the release of their first major label album, Middle of Nowhere, and its catchy hit single "Mmmbop," quickly earning them Grammy nominations and a rabid fan base.

Fast-forward to 2018 as Hanson, consisting of brothers Issac (37), Taylor (35) and Zac (33), prepare to launch a highly anticipated double album, String Theory, which drops November 9. String Theory brings the trio together with Oscar-winning arranger, composer and conductor David Campbell for a special collaboration including orchestral versions of some of their best-known songs as well as new material.

On the heels of their 25th Anniversary Tour last year, Hanson has also just embarked on a new tour to bring String Theory to life on stages across America, backed by some of the country's leading symphonies. The tour will make a stop at the Stifel Theater in St. Louis on Wednesday, November 7, with the band accompanied by an orchestra.

Issac Hanson called in from the road just after the tour kick-off to discuss this special project and 25 years of performing and recording with his brothers. The idea for String Theory, he says, was originally tied to the band's Anniversary, but was pushed back due to the intensive nature of arranging an hour-and-a-half long show with a full symphony.

"We wanted to do something really unique and different and we thought an orchestra tour would be really cool; but when we started diving into it, we realized how much intense preparation it really takes," says Issac. "We wanted to make sure that it was something truly unique and not just us going out and playing singles with an orchestra behind us. So we pushed it back a year to give us time and make sure that we'd have a story and a musical experience that we're truly, deeply proud of. I think that's what we've reached with String Theory."

David Campbell, who is the father of musician Beck and has worked with artists ranging from Carole King, Marvin Gaye, Bob Dylan and the Rolling Stones to Adele and Beyoncé, was the band's first choice to collaborate on the arrangements, though it seemed like a long shot that he would be available.

"He's been involved in so many multi-platinum records you can't even count, not to mention an Oscar winner for scoring," says Issac. "We called him and explained that we really wanted to tell a story, and that it wasn't just about an orchestra backing a band up; it was about us being in the orchestra and us doing musically interesting things in a show like we've never done before. He really got the vision and liked what we were saying, so he said, 'This sounds fun. I really want to be involved in this.' Last week, he actually conducted the show in Los Angeles for us. His expression and how he leads the orchestra through each movement was really powerful and made for a great show."

The Hanson brothers have been multi-instrumentalists from an extremely young age, and while they got their start blending elements of rock, soul and pop, orchestral music was definitely a part of their training as they took classical piano lessons, learning to read music and play pieces by Bach and Mozart.

"I think any musician with a curious mind and inspired heart and ear always dreams like, if this song only had an orchestra," says Issac. "You always have those things in the back of your head. It's like the primo example of your music being really legit – that it might be important enough that 45 people will play it with me."

So far, he says, playing with a full orchestra on stage on the String Theory tour has been both a fun and emotional ride.

"The whole story of the show starts with a song called 'Reaching for the Sky,' and that is a brand new song written for this project that tells the story of a young boy pursuing an impossible dream and the people around him saying, 'Why do you want to do that?' It also tells the story of him growing into a man and being willing to take on the pain of the inevitable adversity that he'll face," he says. "In a lot of ways this whole story is loosely based on our own life experience and our own career; but it's really just a human story."

With each city on the tour featuring a local symphony orchestra, there isn't much opportunity to rehearse. Issac says the orchestras get their parts in advance so they have time to review them and hear them in their heads. Then the band comes in the day of the show and they run through it in its entirety that afternoon one time before performing it live in front of the audience. There is little room for error and no room for improvisation when playing with a full orchestra.

"Everyone is going through a little bit of an adjustment process," he says. "For us to know the charts well enough – you know everything is locked down, nothing is moving. Our shows can usually be pretty free form."

Starting the band as kids, Issac, Taylor and Zac have grown up together through numerous albums and tours, becoming men, husbands and fathers themselves. When asked if, all those years ago, he could have ever imagined that they'd still be selling out shows a quarter of a century later, Issac replies, "I think we only could have imagined it would be the right way to say it."

"You're reaching for the sky, to reference String Theory, and there's a lot of people along the way telling you you're crazy, you're just a little kid, you don't know what you're doing and to some degree that's true. But to get a little broad and philosophical, I'd love to see a societal shift to where we expect more from our kids and encourage them more to be self-reliant and trust them more."

25 years touring and recording together as siblings certainly hasn't been all wine and roses, and Issac makes no bones about it.

"There are fights between us that you wouldn't believe – knock-down, drag-outs. We fight three times a day. In some ways, I wouldn't wish being in a band with your brothers on my own worst enemy," he says. "But the truth is, I feel lucky that I'm in a band with two extremely talented musicians who are willing to go the long haul with me, and in spite of our differences and distaste for each other's personalities from time to time. We do care about the big picture and we really are proud of what we've done together and I think that may be the glue. We take great pride in the work of music."