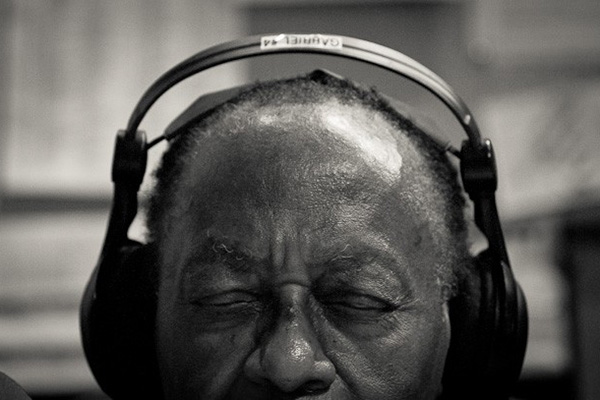 On the second floor of the Larry J. Weir Center for Independent Media, home to KDHX 88.1, an inconspicuous plaque hangs beside the welcome desk. It commemorates the station’s 1999 Best of St. Louis award from ‘The Riverfront Times’: KDHX “Best Radio Music Programming,” Gabriel “Best Radio Personality.” The accompanying article, written by C.D. Stelzer, explains why the legendary St. Louis disc jockey was one of the most respected and influential in the history of the city.

He was, according to the introduction to ‘Gabriel’s Tin Pan Alley,’ “The man. I mean the man! The sensational! The incomparable! The king of the blues! The dynamic, Gabriel!” Under this iconic sign-on played a unique combination of Richard Strauss’s “Thus Spoke Zarathustra” and a Bobby Blue Band introduction from ‘34-22-34.’ This display of inventiveness prompted Tom “Papa” Ray, the host of ‘Soul Selector’ and president of Vintage Vinyl, to suggest, “The argument can be made that [Gabriel] Hearns indeed invented the concept widely referred to as the mashup, i.e. taking two or more tracks and mixing them together for a new sound construct.”

On October 19, Gabriel, who helped pioneer the gritty, eclectic vernacular of St. Louis radio, died at the age of 88. Born Mitchell Hearns in Louisiana, he grew up in East St. Louis and attended Lincoln High School, where both he and Miles Davis learned to play the trumpet. That passion for music followed Gabriel for the rest of his life.

At various times, he owned the seminal record store, House of the Blues, and the label, Tune Town, which released the first known recording of Tina Turner (credited as Little Ann). He also released his own music under names like “Gabriel, His Trumpet and Band of Angels” and “Gabriel and the Angels.” On occasion, he was backed by Ike Turner’s band, as well as the legendary St. Louis guitarist, Bennie Smith.

But Gabriel’s most enduring contribution was to the foundations of St. Louis radio. He began his career at WOKZ in Alton, Illinois before moving to KATZ in East St. Louis, where he stayed through the late 1960’s. As DJ Rich Barta remembers, “KATZ was a Top 80 station and Gabriel transcended the boundaries, to put it mildly, of commercial radio. He didn’t last too long in the 7:30 - 9:00 pm time slot, but [he] was so popular that they had to keep him. I used to volunteer for the midnight to 8:00 am shift at work, just so that I could listen when he did the 1:00 - 6:00 am slot.”

Following a programming dispute with KATZ, Gabriel left for a now-defunct, community-supported station, KDNA. In 1989, he joined KDHX, just two years after the start of broadcasting. Along with Lou “Fatha” Thimes and Bernie Hayes, he influenced an entire generation of DJs who admired both the style and substance of his shows.

According to Dennis Clancy, former co-host of ‘Blursday’ on KDHX, “Gabriel came from an era where blues and country were side by side. Gabriel loved country music, as well as all the music that emanated from the black community.” Once, when Clancy tried to interview Gabriel for his own show, he used the opportunity “to track down a muffler. He was always chasing car parts on the radio. ‘Does anybody, eh eh, have a starter for a (car make, model and year)?’ He left the interview to do what he always did...live his life.”

Jean Ponzi, a former Program Director at KDHX and the host of ‘Earthworms,’ used to partner with Gabriel during membership drives: “He’d pull up to KDHX on Magnolia in his battered van and haul in his two old, funky suitcases packed with cassette tapes, numbered so that he could pull one out quickly. Dozens of people called in their pledges, in $2 to $10 amounts. He would rack up support in those overnight shifts as strongly as programmers in drive time. When I shared the airwaves with Gabriel, especially when he played the Holy Blues, I felt like I was in a radio-magic, charmed circle of timeless music, deep into a Sunday night.”

Gabriel, through the force of his personality, shaped more than the DJ community in St. Louis. He left a deep impression on the staff at the station where he served the longest, KDHX. Chief Production Officer, Andy Coco, met Gabriel for the first time, “just before midnight on a Sunday sometime in 2002. My charge was to create and maintain broadcast quality standards. At the time, show hosts created their own promo spots for their program, working with me to prepare and groom them for air. When Gabriel turned over his promo, on cassette, for approval, it had hissy noise, sloppy edits, varying sound levels and a clunky message. I was flabbergasted and refused to air it without changes. I asked to work together on it, but he made it clear that he was generally uninterested in my help.

We did a little communication song and dance for years. Gabriel would look at me with a puzzled expression, while adjusting his hearing aid in a faux attempt to understand what I was saying. After a decade, Gabriel began to loosen up, to accept my help and support around the facility. As a technician, I am still challenged by the line between quality control and effective rule-breaking for entertainment. Gabriel danced and sang on that line. He taught me that it doesn’t have to sound right to be right.”

While Gabriel’s death leaves a silence, his influence on St. Louis radio will be heard for years to come. KDHX is replacing Gabriel’s ‘Tin Pan Alley’ with the long-running show, ‘Boogie on Down with Hound Dog Brown,’ which moves from its previous slot to Mondays from midnight to 3:00 a.m. The program offers a similar mix of the old-school blues, country and gospel recordings that inspired the birth of rock and roll. As Clancy noted about his last stint co-hosting with Gabriel, which followed a difficult period in his life, “Laughing and listening to scratchy, well-worn tapes...it helped me get through.”