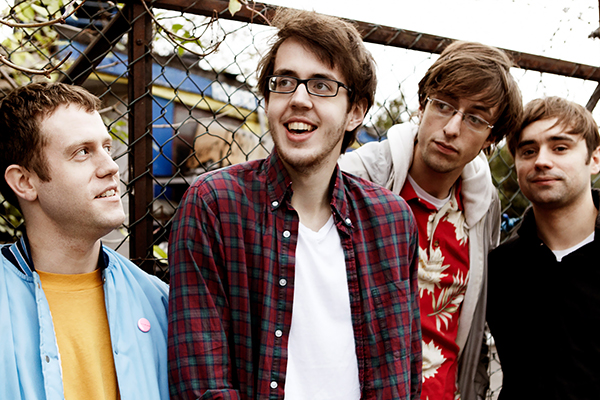 The result is a bare knuckled affair, created with clarity of purpose by a band that is not afraid to take prisoners. Edgy and filled with swagger, it begins with the pummeling “On an Edge” and continues through the Husker Du - flavored “The Echo of the World” before moving into “Dissolution.” That track clocks in at nearly eleven minutes and descends methodically from constructed indie rock into a melee of layered feedback. From there, the album takes a more pop-inflected tone, culminating with “Another Way of Life” -- a song that punctuates their versatility while reaffirming their attention to sonic precision.

Interviewed by phone from Wichita, ahead of Cloud Nothings’ November 14 show at The Ready Room, Baldi spoke about his bands’ evolution, making ‘Last Building Burning,’ and a few other things along the way.

Can you discuss the development of Cloud Nothings from a one man project into a full band?

From the very first Cloud Nothings show, we had a band. But then I made another record where I did everything on my own, and that started to feel kind of weird considering that we had an actual band. So after that I used the guys I had been playing with for a couple of years.

How long did it take to make the new record, ‘Last Building Burning’?

It was pretty quick. We started writing about a month before we went to go record it and then nailed everything down. All day, every day, I practiced and worked with everyone. Then we went down to Sonic Ranch, outside of El Paso, to record it. It’s a crazy studio on a pecan farm down there. We recorded it in seven days. It was a pretty quick process. I wanted it to be that way, because I wanted the record to have a certain kind of energy.

Definitely. I just wanted it to have a rawness that was exhausting to listen to because of how much is going on, a barrage of sound for half an hour.  We worked with this guy, Randall Dunn. He’s done records for Sunn O))) and Wolves In the Throne Room, these punishing bands. I wanted that sound to translate to our record too.

Every Cloud Nothings album has been different from the next. Is that intentional or something that happened organically?

I think it is just a way to keep things from dying. If you do the same thing every time you make a record, it will get so boring and sad that by the sixth record, there wouldn’t be a band anymore. I like to do something different every time to keep it from getting stale.

What is your songwriting process?

I do it as a compulsion, because I don’t know what else to do with my time really. Since I have a large amount of free time. The band is my job. I mainly write songs so I don’t go insane.

How do you select the producers you work with?

Sometimes the label will suggest someone, and sometimes we’ve chosen. It’s fun to work with someone different every time. Again, in the interest of picking who is the best person for this record and keeping things new. Working with the same person twice isn’t a terrible thing, but we haven’t done it yet. I want every record to sound its own way.

What was it like to work with Steve Albini on 2012’s ‘Attack On Memory’?

It was great. I like him a lot. I would do another record with him any time. He had a good handle on bass sounds and things like that. I feel like I was young enough at that point that I wasn’t really paying attention to what he was doing in the studio. I’d like to go back and check out what he was really up to. He knows a lot of stuff

Do you feel that coming from a city with a working class reputation like Cleveland has affected your sound?

Maybe a little bit. The cool thing about Cleveland is that every band from there sounds completely different. There aren’t really two Cleveland bands that sound the same. It’s relatively isolated from the music business, so no one is trying to be cool. It doesn’t matter because people are just doing whatever interests them. I like that about Cleveland. I think it plays into the band a little bit.

How do you balance both the aggressive dirge and pop aesthetics of your sound?

I really like melody. I feel that, if we are a band that is writing songs, we have to have strong melodies or else there’s not much of a reason to listen to them more than once. Even when we are making horrible sounds, I like there to be something catchy, whether it is vocals or a guitar. There has to be something to latch onto so that you’re not lost. That’s kind of been my M.O. for the entire time I’ve been writing songs.

Cloud Nothings are on tour in the U.S. through December, then head to Europe in early 2019.