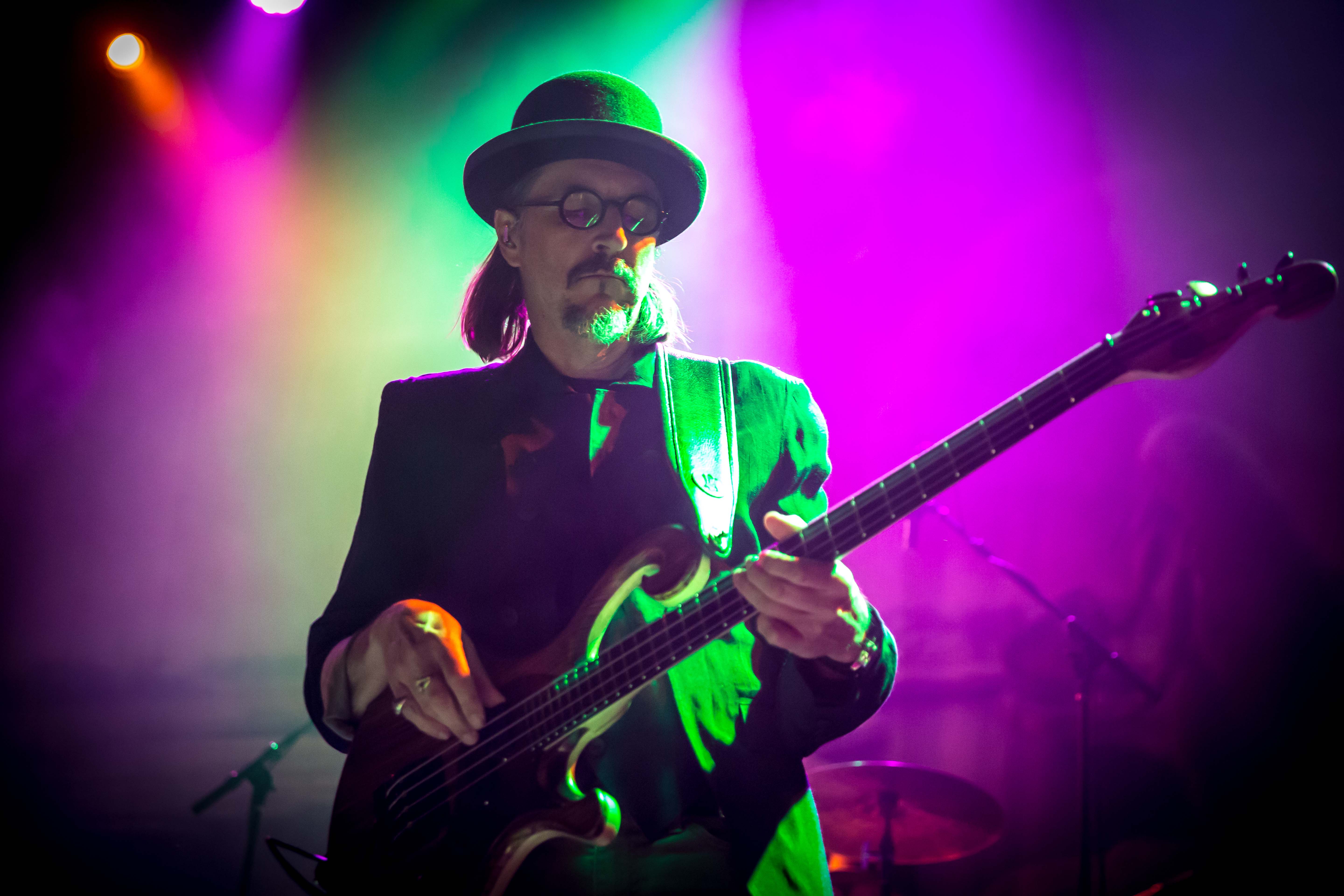 For once, nobody yelled, “Primus sucks!” It seems Les Claypool has finally managed to bury the phrase under new sounds and projects. It has only taken a dozen or so years and about as many albums to do it. He has collaborated with some of the most creative minds over these years. Bernie Worrell, Skerik, Trey Anastasio, and Gabby La La are just a few colorful personalities to play in Claypool’s sandbox. But the most recent focus of his attention, The Claypool Lennon Delirium, highlights Claypool’s creaky, froggy vocals and dense bass lines in yet another unique way.

Les Claypool and Sean Lennon seem a perfect compliment, with Lennon’s dreamy, detached, spacey voice and bubbly guitar drawing Claypool into imaginative new territory. As he aptly summarized, “Seany here reads all the time. He’s always reading. All kinds of things. Things like ‘Wired’ magazine.” Lennon recounted an article on the cellular reproduction of mitochondria. Claypool, for his part, declared he was more likely to read an article about replacing a carburetor. And it is this yin and yang dynamic – Lennon wistfully calling out into the universe while Claypool anchors us down to the earth – that makes the sound, the subjects, and the tone of Claypool Lennon Delirium one of his most exciting projects to date.

Nowhere was this contrast more apparent than when Claypool, in the crochety old-man style he’s embodied since his twenties, croaked at the crowd to stop with the flash photography. He pointed fingers and belabored the point, connecting the fans’ behavior to compensation for their manhood, as Lennon played the good cop, inserting levity by turning the comment into a joke – “Negligible Penis? Isn’t that a Slayer album?” I expect a Jack White-style all-out ban on cellphones in their future, and it probably would relieve a lot of stress for all parties involved, as the girl next to me panicked after accidentally letting the flash fly on her phone a few minutes later.

The setlist focused primarily on the new album, ‘South of Reality,’ interspersed with some ambitious and well-executed covers and a few tracks from the band’s debut, ‘The Monolith of Phobos.’ Most Claypool Lennon Delirium songs are tightly crafted, often telling the tale of a character’s evolution over time, a trademark of Claypool’s overall style. This evening the tales were more meandering, a little more jammy, with ample solo action from both Claypool and Lennon, sometimes in tandem. They seemed to enjoy the interplay and took several opportunities to play face-to-face, letting the strings speak to each other, eagerly reaching for the magical serendipity of live performance.

They opened with a tense but buoyant version of Pink Floyd’s “Astronomy Domine” which led neatly, sonically, into “Little Fishes.” The tone, however, demonstrated the other side of their coin, with lyrics bemoaning those rosy “simpler times” before the mercury settled in “soft and supple brains,” when kids rode bikes without helmets and playground equipment was dangerously fun, when boys were boys and girls were girls – before kids became snowflakes, basically. It’s a catchy tune, but longing for the days “when your brand of genitalia would determine where to piss” is enough to raise this snowflake’s hackles every time. I prefer the self-deprecating perspective of Colonel Les Claypool’s Fearless Flying Frog Brigade’s “Long in the Tooth,” which instead heckles the older generation for being so afraid of change.

“Cricket and the Genie Movements I and II,” a sympathetic tale of slipping into drug addiction and oblivion, were a welcome visit to the band’s debut album. Claypool alternated between standing with his left foot perched on a speaker and pacing in a circle. Lennon stood mellow in the shadows at the opposite end of the stage, his long, wavy hair occasionally catching a draft from beneath his captain’s hat. One of the evening’s highlights, a cover of “The Court of the Crimson King,” gave the synth player a chance to shine. “Toady Man’s Hour” was Lennon’s turn, giving him plenty of room to interpret the paranoid character. The opening riff smacked of Primus’ “Duchess and the Proverbial Mind Spread,” but Lennon’s touch brought it out of the delusional loop and added more reactionary personality, leaving Claypool to comment, “I really felt you were channeling Toady Man there!”

It would be unfair not to mention the opening band, Uni. Quite unlike the headliner, Uni brought a mixed bag of styles: dangerously high stacked platform heels, polyvinyl pants, and a mesh shirt on the vocalist; micro jean shorts, ripped tights, and a ringer tee on the bassist; white fringe jacket and matching white vaquero hat on the guitarist. Fittingly, their sound blended glam and art rock, with theatrical vocals and guitar switching between buzzy reverb and some Duran Duran-style 80’s pop.

Judging by The Claypool Lennon Delirium’s covers of choice, which also included a little-too-structured, not-delirious-enough version of The Beatles’ “Tomorrow Never Knows,” it appears that the lengthy jam stretches represent the duo’s vision for their next album – turning up their psychedelic tendencies and leaning into their respective classic rock influences. The tangents and turns in “Amethyst Realm,” another highlight of the show, were exemplary and wove these foundational sounds together beautifully. I hope to see the duo continue in this vein. 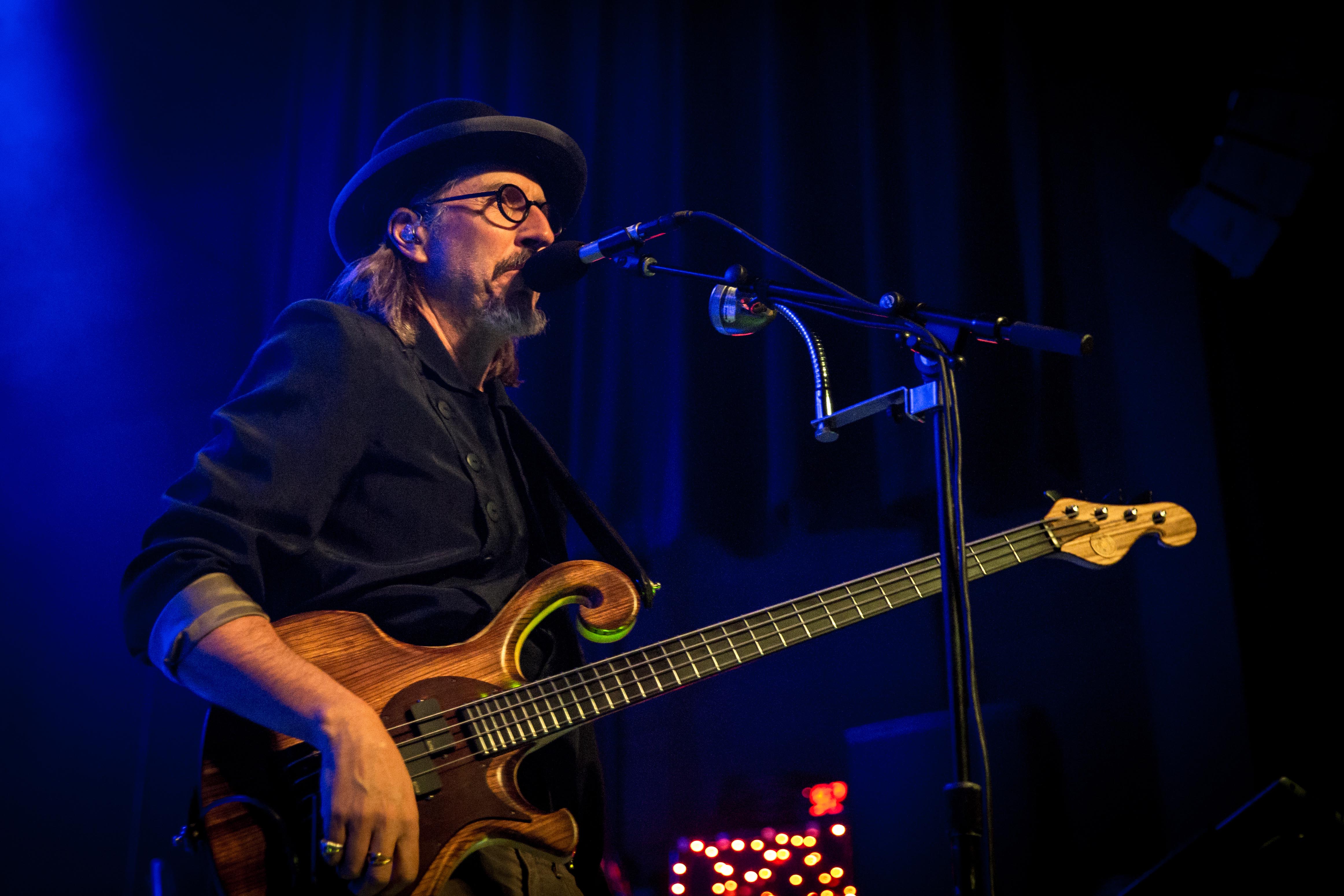 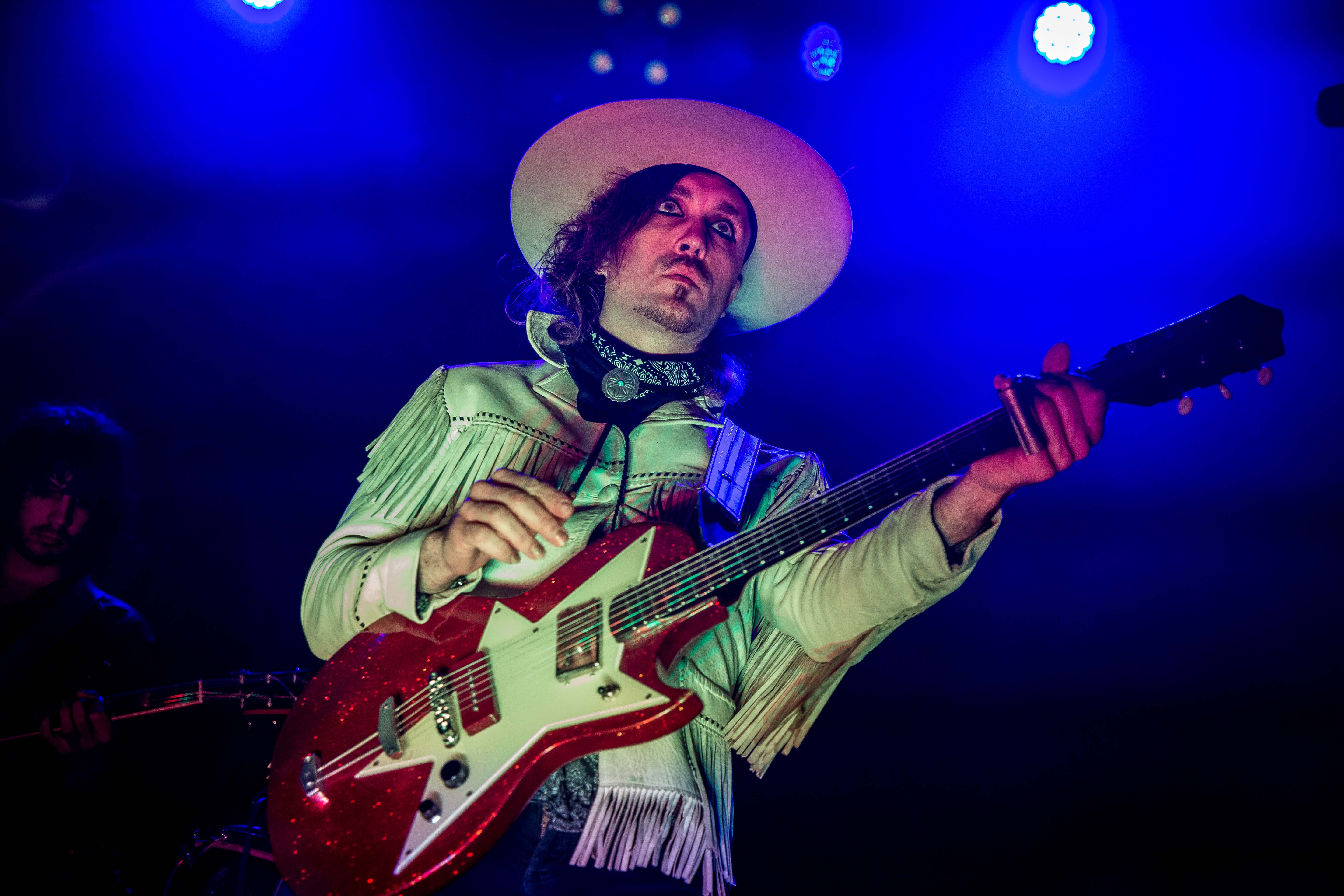 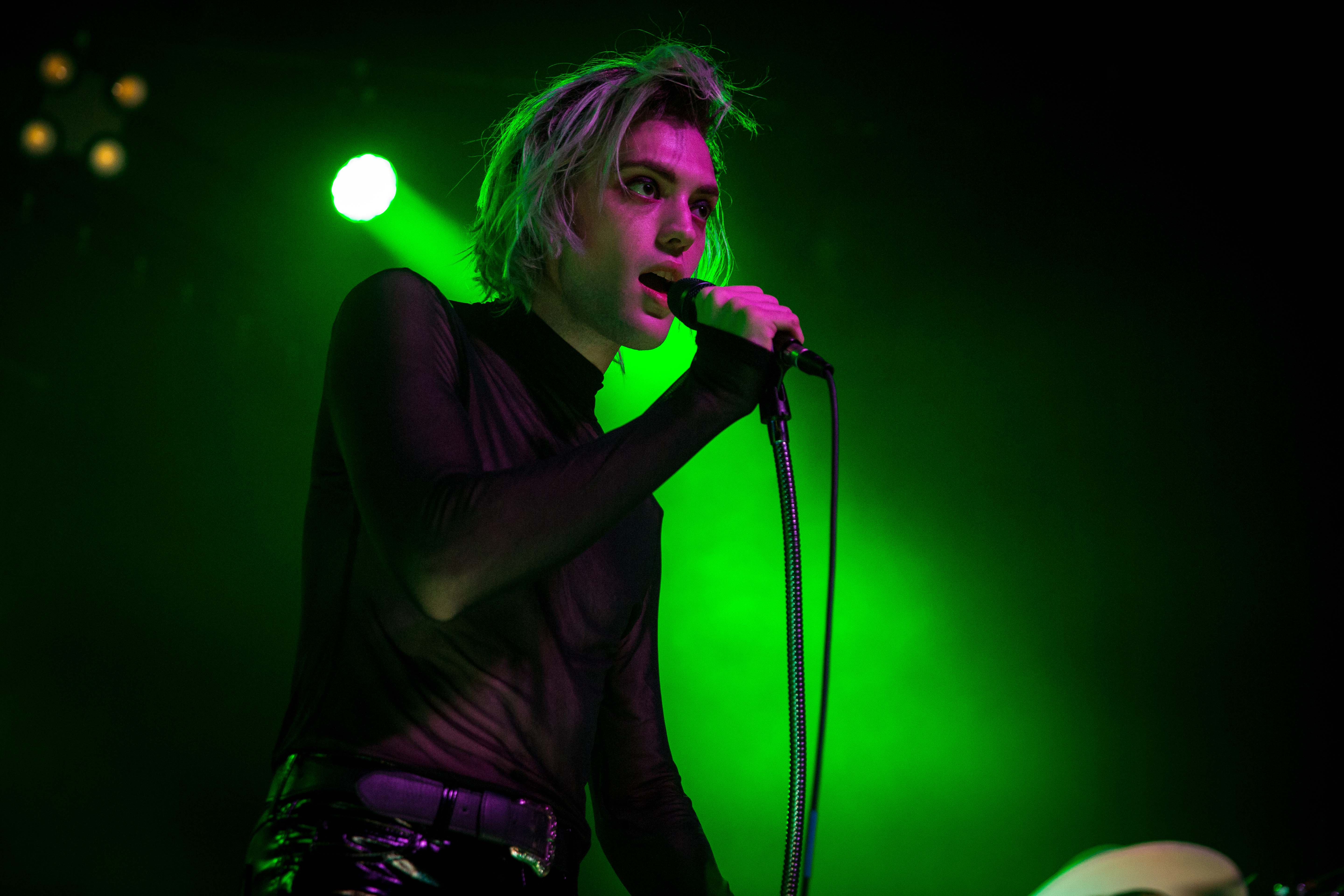 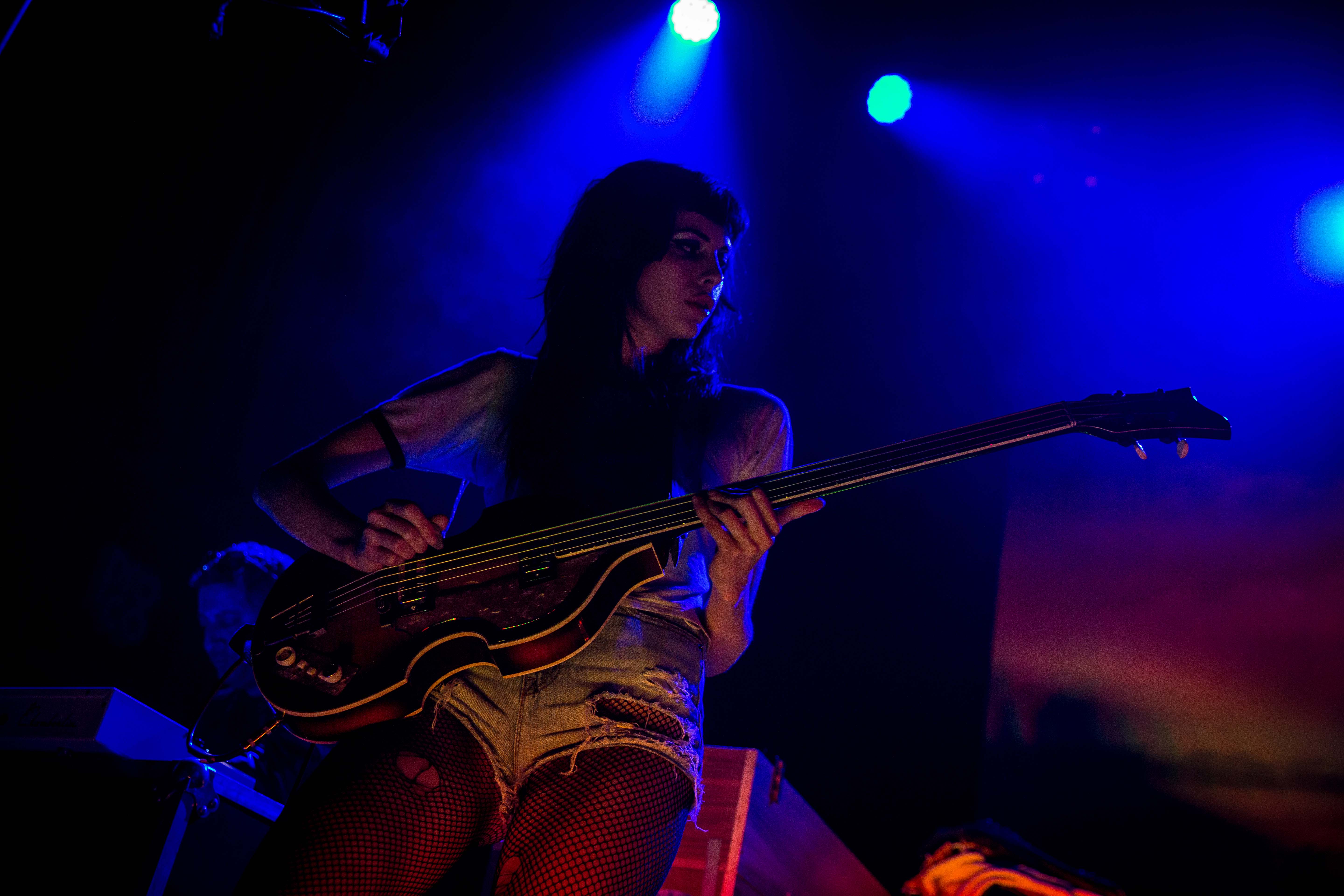