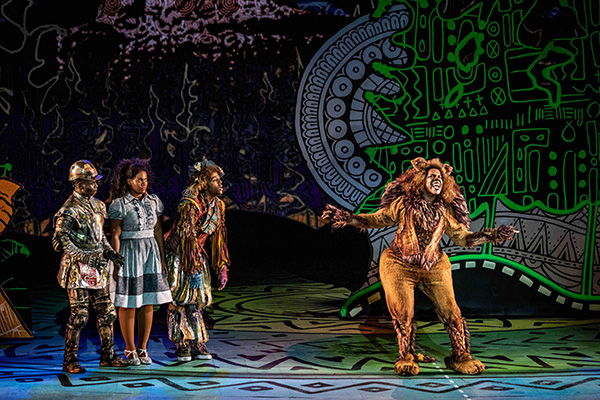 Everyone knows L. Frank Baum’s beloved classic, "The Wonderful Wizard of Oz." William F. Brown's dazzling musical adaptation, "The Wiz," featuring an all-black cast and steeped in sounds of soul and gospel, first debuted on Broadway in 1975, scooping up seven Tony Awards including the coveted Best Musical. The Muny brings this family-friendly show back for its 100th season with a refreshed production that honors the original while making it fit for a "Brand New Day."

The Muny enlisted witty "Late Night with Seth Meyers" writer Amber Ruffin to help punch up the script for its production with some fresh material and jokes that appeal to modern-day audiences. The result is a delight from start to finish that has something for theatre fans of all generations.

The general plot points stick close to the origin material with cultural twists. It's no surprise how Dorothy lands in Oz, the friends she meets along the famous yellow brick road, or the challenges they face in trying to get the things they desire most. What keeps The Wiz engaging lies primarily in the stellar performances by its extremely talented cast led by Danyel Fulton, making her Muny debut as Dorothy. Fulton has all of the child-like exuberance required for the role, combined with a powerhouse of a voice that proves itself within the first few notes of "Soon As I Get Home" early in Act One.

Her trio of infamous cohorts proves equally as well cast with Jared Grimes as the delightfully clueless Scarecrow, James T. Lane as the sweet if "heartless" Tinman and Darius de Haas making his Muny debut as the comical cowardly Lion. Each carried their roles and solos with precision, and when the four friends harmonize in the infectious, well known number "Ease on Down the Road," it's pure musical magic.

The supporting cast provides some of the most fun moments and comic relief along the way. Standout E. Faye Butler does double-duty as sister witches Addaperle and Evillene (in diva-fabulous costumes by Leon Dobkowski), injecting her numbers with vivaciousness and soul. Nathan Lee Graham, a St. Louis native and graduate of Webster University Conservatory, brings a touch of James Brown style and swagger to title character The Wiz (not to mention a sparkling emerald cape and bell-bottom jumpsuit). His performance is aided by some dazzling pyrotechnics that only an outdoor stage can accommodate.

Even the ensemble shines in flashy dance numbers like "Emerald City House Party," which feels like a mini-episode of "Soul Train" with each dancer showing their stuff to funk-inspired grooves under the musical direction of Darryl Archibald.

Big kudos go to scenic designer Edward E. Haynes, Jr. and lighting designer Rob Denton for bringing Oz to life with vibrant and ever-changing set pieces framed by the enormous trees behind the Muny stage, awash in the glow of colored lights. This production of "The Wiz" is as much a feast for the eyes as the ears.

Though Act One is lengthier, setting up the story and bringing it to its dramatic apex, Act Two packs the heaviest musical punch with songs and performances that speak most directly to the show's critical messages including the joy of friendship, looking within yourself to achieve your dreams and the loving embrace of home.

Upbeat and jubilant "Brand New Day" marks the protagonists' triumph over the wicked Evillene and their hope for the future. Demetria McKinney does a brief but inspiring turn as good witch Glinda belting the beautiful "Believe in Yourself." Finally, Fulton once again brings star quality to Dorothy for the soaring closer "Home."

"The Wiz" provides a fun and heartwarming experience for both musical theatre veterans and new, young fans. It runs at the Muny through June 25.