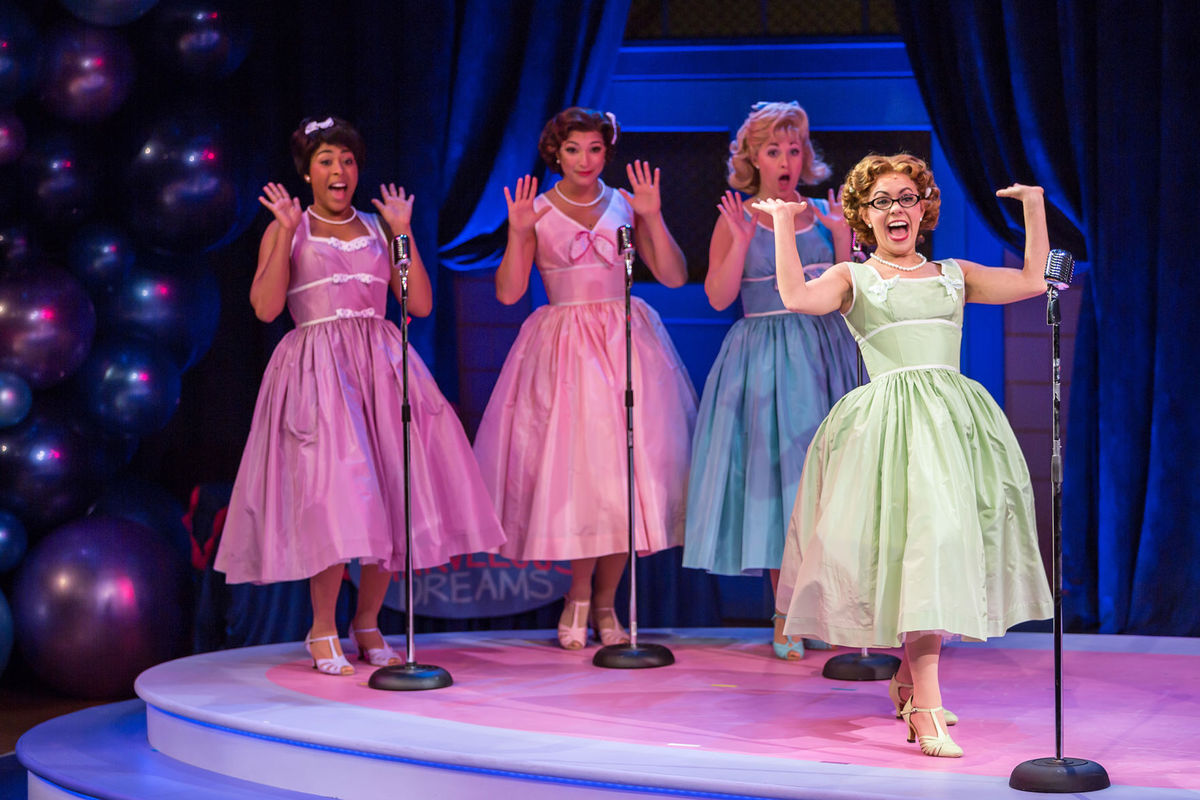 The high-energy jukebox musical, The Marvelous Wonderettes, re-imagines the stage at the Repertory Theatre of St. Louis as a high school gymnasium, the setting of the 1958 Senior Prom and 1968 reunion. The Marvelous Wonderettes have stepped up at the last moment to replace the all-boy glee club as prom entertainment and the comic results are sometimes clumsy, often endearing, and always delivered with pitch perfect harmonies.

Musically, the focus is on the hits of girl-bands and female performers from the 1950s and 60s as well as choreography that reflects the popular dance and performance styles of the eras. The plot loosely connects each character’s song choices to her personal story and is a charmingly light and funny look at the early days of rock and roll delivered from the women’s point of view. The women bicker like teens, but never miss their cue, and their choreography is a bit unpolished but delivered with heart and soul.

Betty Jean, Cindy Lou, Missy, and Suzy are your typical middle class high school girls, they’re best friends one second, then fighting over the same boy the next. The dreams they harbor are solidly anchored in the middle-class values of their time, with visions of motherhood and children reinforced by Suzy’s character, but there’s a distinct maturation by the second act, set 10 years after the first.

Chiara Trentalange and Iris Beaumier, as Cindy Lou and Betty Jean, respectively, anchor the show and music. Their voices clear and true, they shine whether harmonizing or taking a lead. Morgan Kirner and Leanne Smith, as Missy and Suzy, are also in fine voice, expressing the specific quirks and qualities of their characters to humorous, if at times awkward, delight. The four successfully create the right tension between the teenagers and their sideways looks, snaps, punch spiking, outright sabotage, and commentary add comedy and interest to a book that, unfortunately, tries too hard to create a song-themed story arc.

The songs are almost too appropriate for many of the character’s situations and while Betty Jean’s philandering boyfriend creates sympathy, Missy’s crush on their teacher and vocal coach Mr. Lee gets a bit unsettling. And while I understand the appeal in bringing a member of the audience to the stage and humorously singing to them, the moment can be more uncomfortable than funny, as it felt the night I saw the show. The treatment also results in characters that are a bit flat and one-dimensional. The ensemble brings plenty of energy and livens things up a bit, and luckily it’s the music that’s the draw in a jukebox musical.

The stage and the area above the audience’s heads gets a classic high school gymnasium feel from a clever design by Adam Koch that incorporates basketball hoops, balloons, and the suggestion of locker rooms backstage. Peter Sargent’s Lighting design, particularly the occasionally off-the-mark spotlight, and Dorothy Marshall Englis’ simple but perfectly period costumes add convincing touches that help transport the audience to the era. The show evokes a sense of post-war suburbia that’s isolated and comfortable to a T, I wish the show and connecting stories were as satisfying as the environment and personalities the Rep production suggests.

The majority of the songs are familiar, even to those born in later generations, and include “Mr. Sandman,” “Allegheny Moon,” and several clever medleys filled with recognizable tunes in the first act. The second act kicks up the intensity and energy with “It’s in His Kiss,” “I Only Want to Be with You,” and “Son of a Preacher Man,” as well as a spirited ending medley that includes “Respect.” The ensemble all have strong, solid voices, though no single performance stands out as exceptional the show entertains. The live band, playing off stage, provides depth and texture, plus a few fun vamps and transitions adding to the overall bouncy energy.

The show is about the music and, in this respect, it’s a nostalgic, well sung revue, with lots of telling intonation and emotion. With solid direction and clever, period choreography by Melissa Rain Anderson and musical direction by Joshua Zecher-Ross, The Marvelous Wonderettes, running through January 28 is an entertaining escape with a soundtrack you can dance to.