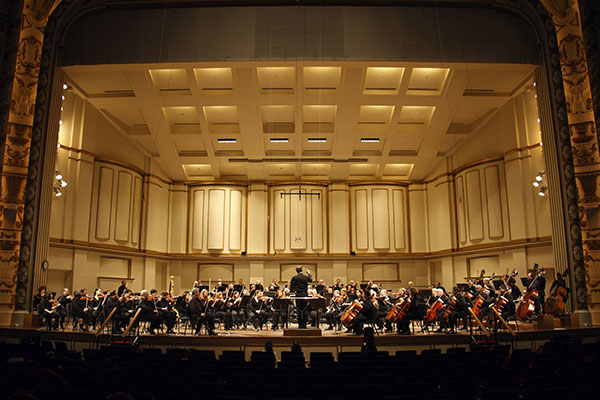 From America - And Russia And The St. Louis Symphony - With Love

Leonard Bernstein once noted that many people feel the Romantic period in music never ended. Last weekend's performances by the St. Louis Symphony demonstrated that perhaps there is some argument in that direction. The program consisted of three works all composed in the 20th century, yet all possessing a decidedly Romantic bent.

Although the program was themed "American Voices," such a designation lies open to debate: The central work on the program, the Concerto No. 2 in C Minor by Serge Rachmaninov, was written in Russia in 1901 (making it barely a 20th century work, but still within the range) before the composer ever visited the United States. On the other hand, Rachmaninov became an American citizen shortly before his death in 1943. Moreover, he is a composer whose pervading influence on American symphonic and film music is easily noticeable, so perhaps it should be left to the listener to determine for him/herself whether America can claim Rachmaninov as a home voice.

The brilliant Macedonian pianist Simon Trpceski joined conductor David Robertson and the St. Louis Symphony Orchestra (SLSO) for the Rachmaninov concerto. Although Trpceski gave a lyrical interpretation to the concerto, it was not for lack of power in his hands. The concerto seemed effortless for him. Rachmaninov was a master of rhythm, melody and virtuosity. Trpceski demonstrated the same mastery as a performer.

It is gratifying to watch Trpceski as he performs. Like all great musicians, he understands fully that any musical instrument is played not just with the hands or lungs, but with the entire body. He played like an athlete and never held back. The standing room-only capacity crowd immediately jumped to their feet at the conclusion.

Ever a team player, Trpceski performed for his encore a special arrangement of the Rachmaninov "Vocalise" with principal cellist Daniel Lee. It was a beautiful moment of honoring the music more than personal display, as well as honoring the memory of one of history's greatest composers, who also happened to appear with the SLSO on more than one occasion. Lee played with an ethereal elegance and sensitivity that surpassed the capabilities of most human voices.

Trpceski is a passionate performer of traditional Macedonian music. Hopefully at some point in the future we will get to hear him perform in St. Louis some of the music of his homeland. Macedonian music is bright, driving and infectious and deserves to be widely heard.

David Robertson led the orchestra with a lush sensual romanticism that would have surely pleased Rachmaninov, but it was sadly out of balance with the piano at several moments, particularly at the beginning when the orchestra makes its entrance against the florid arpeggios flowing from the piano. Such impetuosity is beautiful, but it should be tempered with control when a solo instrument is involved.

The second half of the program was devoted to a performance of Howard Hanson's Symphony No. 2, "Romantic." It was here that Robertson's sweeping approach was entirely appropriate, imparting a lustrous shimmer not just to the string section, but also to the winds and brasses. Hanson had written the symphony somewhat in reaction to the bombastic nature of 20th century music. Yet, it would be a mistake to consider this in any way a "retro" work. It stands on its own, harbored firmly in its era. The melodies are simple, yet clothed with the grandeur of all the voices of the orchestra and all the resources of harmony. Robertson imparted the majesty and boldness that a work of this sort requires.

The program opened with Aaron Copeland's "Fanfare for the Common Man." Easily recognizable by most people today, Copeland used the work to honor the diligence and courage of the not-so-average Americans who fought brilliantly against tyranny in the 20th century, even though politicians and bureaucrats might have liked to usurp the glory. The performance of this short work is also a tribute to the hard work of the brass and percussion players who perform it, and by extension, to all musicians who labor tirelessly at their craft, thus bettering the lives of all of us.