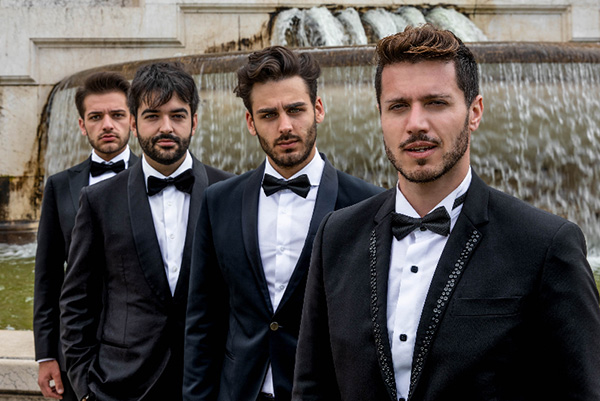 A fine singing voice is always a pleasure to hear. But when you multiply it by four and add two talented collaborative pianists, and then present all six in a beautiful space, you have a truly memorable experience. Such was the case when the Four Italian Tenors made their St. Louis debut, hosted by the Cathedral Concerts series under the leadership of Scott Kennebeck.

Alessandro D’Acrissa, Federico Serra, Federico Parisi and Giovanni Maria Palmi, ably assisted by pianists Fabrizio Mocata and Emanuele De Filipinas, all still young, have embarked on their first North American concert tour. All four have trained extensively in Italian conservatories, and all have performed various operatic roles. Their range of experience includes not just opera, however, but liturgical music and appearances performing popular music on television and in live performances.

The program at the Cathedral Basilica consisted almost exclusively of liturgical music. Several solo piano selections were featured as well. Although the group possesses a high degree of technical skill and brilliance, they focused on resonance and clarity of tone. Similarly, the piano selections were chosen with lyricism and melody as the central goal rather than keyboard gymnastics, as evidenced by the inclusion of such works as the Adagio of Tomaso Albinoni, the “Santa Maria” (Intermezzo) from “Cavalleria Rusticana” by Pietro Mascagni, and even a blues piano version of “Amazing Grace.”

Among the vocal selections, standard crowd pleasers such as Cesar Franck’s “Panis Angelicus” and both the Schubert and Bach-Gounod settings of the Ave Maria figured prominently. But the audience was also introduced to the Gloria of Ariel Ramirez, a beautiful, rhythmic contemporary work, and the engaging Christmas carol “Mille Cherubini” (A Thousand Angels) by Franz Schubert. (It is hard to understand why this carol is not more widely performed.) “Fratello Sole, Sorella Luna” (Brother Sun, Sister Moon), by Riz Ortolani, which inspired the similar English version by Donovan used in Zeffirelli’s film biography of St. Francis, was also included in the program.

Although the Cathedral Basilica is an awe-inspiring edifice, the space is so cavernous that at times it was difficult to hear the majestic voices. Even the grand piano chords were sometimes lost in the curvature of the cruciform sanctuary. Perhaps a small amount of amplification might be called for in cases like this. Earlier in the day when the group made a teaser performance at St. Ambrose Church on the Hill, the sound burst forth throughout the entire church, but the size and special architecture of the Basilica make special demands on the performers.

Quite often the Tenors sang solos rather than as a group. Admittedly, there is not a lot of repertoire for vocal ensembles made up of a single vocal register, but as the Tenors continue to gain popularity and grow in demand (as they surely will), they may want to consider scouting out more repertoire that would showcase them together, or perhaps even commission some special arrangements and/or new compositions.

Here and there the vocalists were not always completely in sync with the pianists, but the musical gestalt never wavered. And it could even be argued that sometimes in the heat of climactic moment the drama of the music just might be heightened by a bit of unplanned give and take between the performers.

What was most apparent, though, is that the Four Tenors and their collaborating pianists gave 110% of themselves to provide an exuberant and vibrant performance that will surely be only the first of many appearances in North America and around the world. Their voices made the sanctuary ring like a bell.

Kudos to Scott Kennebeck and the staff of the Cathedral Concerts. For further information, visit cathedralconcerts.org, or call 314-533-7662.