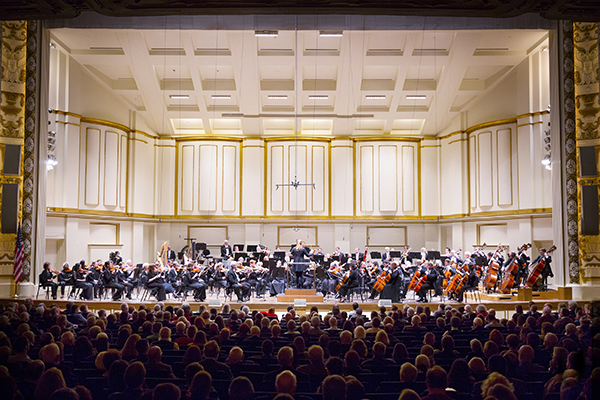 The formalism of the Classical period in music (roughly 1725-1810) can become tedious to some listeners, despite the fact that this was the era that gave us Mozart, Haydn and Beethoven. But the Saint Louis Symphony showed us the dynamic and surprising ebullience of the Classical era, bursting forth in a program consisting of Franz Joseph Haydn's Symphony No. 48, "Maria Theresia," and Wolfgang Amadeus Mozart's Mass in C Minor, K. 427.

Guest conductor Masaaki Suzuki, a renowned expert and interpreter of the music of Bach, imparted a freshness and spontaneity to both works that we don't usually expect; the Mass sparkled brilliantly and almost seemed to soar with wings of its own, and the Haydn symphony – which should have been particularly formal due to its association with the Austrian empress – sang with a sprightly elegance that imparted a sheen to its fanfares, brisk melodies and introspective slower sections.

For the Mozart Mass, the SLSO joined ranks with the Saint Louis Symphony Chorus and soloists Carolyn Sampson, Joanne Lunn (sopranos), Zachary Wilder (tenor) and Dashon Burton (bass-baritone). Under the leadership and development of Amy Kaiser, the Saint Louis Symphony Chorus has become noted for a smooth velvety timbre and well-blended resonance, but its sound was particularly rich in this performance. It seemed as though the voices together became a palette of many colors that illuminated Mozart's textured score brilliantly.  In particular, the Chorus rang out triumphantly in the closing "Osanna in excelsis" of the work, with the various intertwined sections dovetailing and almost chasing each other up to the rousing conclusion.  The orchestra provided a vigorous and masterful underpinning under Suzuki's guidance.

All four soloists demonstrated a florid and well-phrased command of all passages. Intonation was uniformly spot on. Balance between the soloists and the orchestra was quite good, but the singers could have projected even more without overwhelming the orchestra. Mozart's score did not utilize the bass-baritone as much as the other soloists, but Dashon Burton has an incredibly rich and powerful voice that needs to be heard more in St. Louis. Hopefully he – and all three of his soloist colleagues onstage – will be invited back repeatedly for future engagements.

The juxtaposition of the Haydn Symphony No. 48 made an interesting complement to the Mozart Mass. Although similarly composed to produce a sense of grandeur, its shorter length and smaller ensemble of players made the Mass all the more noticeable for its larger scope. That is not to say that either is necessarily preferable, but the two together illustrate that the Classical era generated more diversity of musical thought than we sometimes realize. It has been noted that the structure of today's popular songs heard on radio owe much of their structural development to the influence of the Classical symphonic form. Ironically, the dedication of Haydn's symphony to the Empress Maria Theresia, whom Mozart regarded as a particular nemesis (possibly the inspiration for the Queen of the Night in "The Magic Flute"), demonstrated, then as now, the overarching reach of politics into art and culture.

It is interesting to bear in mind also that Mozart's devotion to Catholicism was dubious at best. As a Freemason and a citizen who secretly harbored resentment of the ruling class, nevertheless he chose to compose a visceral setting of Roman Catholic liturgy.  On the other hand, he did leave the score unfinished....

Masaaki Suzuki directed with a visibly authoritative grasp of the scores. Throughout both works he conducted with solid confidence. He evinced an uncanny ability to allow the Chorus to project without restraint, yet never overwhelming the orchestra. Throughout the concert, the music remained focused yet spontaneous. He is one of our great conductors today, and was ably assisted by Amy Kaiser and the dedicated members of the Saint Louis Symphony, Chorus and soloists.