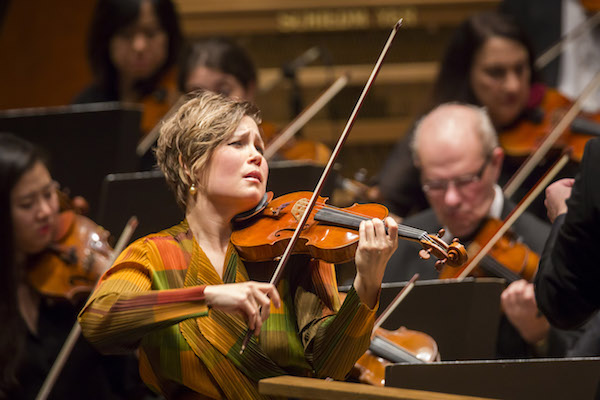 In his own words, contemporary composer John Adams describes his Violin Concerto, written in 1992, as an effort toward a renewed emphasis on melody -- "hypermelody" as he called it.  Adams did not clarify exactly what he meant by the term hypermelody, but it seems he meant it to refer to the effusiveness of the violin figurations that coast above the more muted orchestral underpinnings throughout the work. With Beethoven's Eroica on the second half of the program, the program seems to set up a relationship between heroic boldness and deep introspection. Conductor David Robertson led the St. Louis Symphony in performances of these works, with the phenomenal solo violinist Leila Josefowicz, who has made the Adams concerto her signature work.

Adams is an enigmatic composer in many ways. He is prone to quoting other composers and has a penchant for dream-like titles that sometimes reference his own family members. It was not long ago that his opera The Death of Klinghoffer, dealing with the murder of an American Jew by Palestinian terrorists on board an Italian cruise ship, triggered a storm of protest at the Metropolitan Opera, since it was perceived by many to favor the Palestinian cause over that of the Israelis. David Robertson conducted Klinghoffer at the Met and has been one of Adams' strongest champions. Adams' work has ranged from meditative minimalism to conventional (banal?) atonalism to innovative melodies and even to occasional touches of traditional harmonies and melodies. However, his Violin Concerto is surely one of his greatest works, building to a phenomenal climax at its close after rising on an ocean of movement in the earlier sections. Among American orchestras and music schools today he seems to hold an almost cult-like significance, but works such as this concerto are worthy of listeners' attention.

With both Canadian and American roots, Leila Josefowicz is one of the most prominent virtuosos onstage today. She plays with fervor, confidence and conviction. It takes a performer such as she to bring life to any contemporary work. She performed the challenging score from memory, demonstrating her total mastery of all its intricacies.

This concerto is surely challenging to both orchestra and soloist. It requires a firm and confident conductor as well. Robertson clearly understood the work and remained unwavering, as we have grown to expect. There seemed to be some balance problems in the hall. Although Josefowicz has performed this work with eloquence and a deep lyricism, it was sometimes difficult to hear the voice of the violin against the orchestra, primarily in the opening movement. This gave the performance a bit of a rough edge, but it is important to bear in mind that concert halls sometimes offer poor acoustics, despite the best efforts of conductors and engineers.

Both Adams and Beethoven provide evidence that politics can be risky business for composers. Like many in Europe, Beethoven initially admired Napoleon, seeing him as a savior of the citizens who were oppressed by the crushing weight of the nobility and monarchies. His Symphony No. 3 was dedicated to Napoleon. To Beethoven's horror, Napoleon went on to declare himself an emperor. In disgust, Beethoven ripped the dedication from his copy of the score, declaring, "So he is no more than a common mortal!" However, the symphony remains as one of his greatest works, and one of his most innovative. The grinding dissonant chord in the first movement and the ruminative funeral march have made the symphony famous, along with its soaring themes.

Although both the Adams concerto and the Eroica are characterized by boldness, there is also a great deal of quietness and reflection in both works. Boldness requires confidence and confidence is the product of self-examination. The SLSO captured the essence of both.

Sometimes when the Symphony prepares a particularly challenging contemporary work it becomes noticeable that the more traditional works in the program seem to get short shrift. That did not seem to be the case in this program. The orchestra performed as a unified whole with riveting accuracy. Although every section of the orchestra is magnificent, the horn section and the woodwind section were particularly electrifying in this performance. The audience, although not as large as one might have liked, responded with great enthusiasm to both halves of the concert. The heroes of this program were the performers themselves.