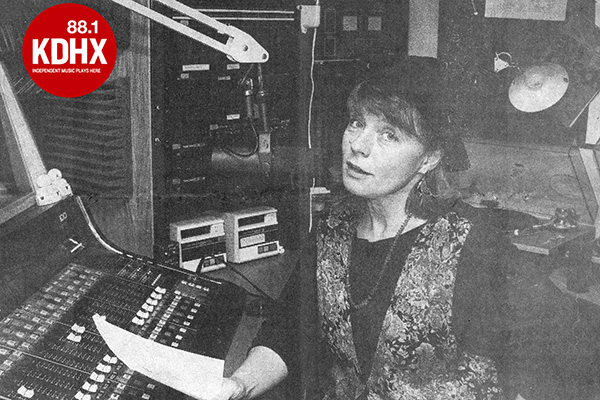 Jean Ponzi: Negativity and Positivity in a Time of Reckoning

Jean Ponzi is excitedly recounting how she came to be one of the featured speakers in the upcoming TEDxGatewayArch Crash Course event, set for September 12, 6-9 PM at The Pageant. For 25 years Ponzi has been one of St. Louis’ most visible environmental professionals, known for her work at the Missouri Botanical Garden, her Earthworm Castings column in Healthy Planet Magazine and, of course, her KDHX podcast Earthworms. The event will feature four revolutionary speakers, three local entertainers and two interviews.

Ponzi took a pleasantly rainy afternoon off from preparing for her presentation to discuss how negativity, environmentalism and philosophy fit together.

Her presentation, “Earth Needs Negativity” is an examination of a concept she has long pondered. “The relationship with negativity has been the cornerstone of my philosophical outlook for my entire adult life.” She will dig into the concepts of duality, reciprocity and fear while reframing our relationship with what we call “negative” and “positive.”

“You can look at that in a dualistic, linear way where you’re always on one end of the other, and always a little bit afraid we’re on the wrong end. And when we are afraid we can be controlled and manipulated,” warns Ponzi.

She approaches the topic from an ecological perspective, focusing on magnetism and life cycles. The consideration of negativity and positivity has pushed her to examine all preconceptions, and even the language she uses. “Let’s call the things that are bad by their true names: lying, greed, misogyny and racism. Let’s not dishonor negativity.”

As a woman, this is particularly poignant.  “From early point in my adulthood, I looked around and saw all that female stuff being defined as negative and I thought, ‘I don’t think so. Uh-uh.’”

She hopes her presentation will inspire a shift in a perspective for attendees. “I want the message to be a feeling of empowerment, and that what each person in the audience has to offer is needed … This is a time of reckoning for the human species. We are the dominant species on the planet. Our activity is impacting all other living things and all living systems … As such, our species has a responsibility … With a TED Talk you are seeding an idea into the hearts and minds of everyone who is watching.”

Seeding ideas is a way of life for Ponzi. Her podcast Earthworms is her longest running “job” and “because I still have little Earthworms segments, I am the woman who has been on <KDHX> the longest.”

She uses Earthworms to focus on the encouraging actions people are taking and differences they are making as a way to counterbalance the painful realities of a burning Amazon rainforest, melting glaciers and endangered lives due to environmental negligence. “What a gift <Earthworms> has been for me as a professional and a human! And people are still listening even though there are a zillion other things you can listen to.”

Ponzi grew up in a musical family and even played the French horn in her youth. But when she took to the airwaves at KDHX in 1988, she didn’t play music. Instead, she was offered an opportunity to do a talk show and she jumped in. “I had no idea what talk shows were about. I had watched the Steve Allen show and early predecessors of Johnny Carson. But this was before Rush Limbaugh and before it was anything like it is today.”

At first she did a general interest talk show where she interviewed guests at restaurants on Friday mornings “so we could have hash browns.” Then she was offered an opportunity to do a midday interview show on Wednesdays. Despite the lack of hash browns, Ponzi again jumped in. She soon decided to focus the show on her passion for environmental topics and “Earthworms” was born.

“It has been a series of wonderful opportunities that landed in my lap and I was smart enough to meet them,” Ponzi said of her years of volunteer service with KDHX.

Despite those years on the air and giving hundreds of public presentations to groups large and small, preparing for Crash Course has been a crash course of its own. After an application and selection process that included boiling down her presentation into 100 words and doing a three-minute introduction, Ponzi then was paired with coaches supplied by TEDxGatewayArch to help her hone her presentation into 10 minutes that are polished, structured and focused. They hold group practice sessions and she is enjoying the support. “I’ve never had coaches before – it’s great!” “This experience of being a TEDx speaker will be transformative to how I do what I do.”

For tickets and more information on the Crash Course event, visit the TEDxGatewayArch website.

And be sure to catch the latest episode of Earthworms!