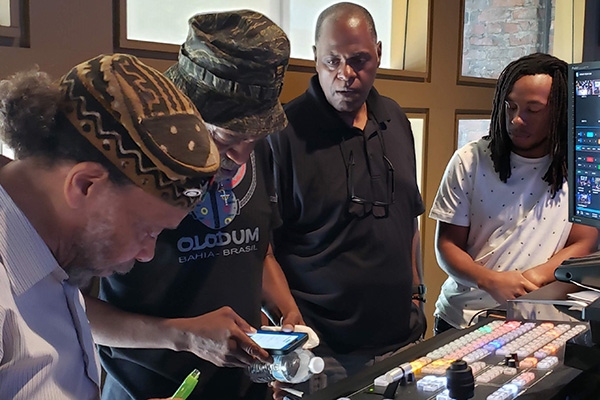 Soul Heaven Has a Production Technician

Every band has a member you never see onstage. These are the artist/technicians who use the stage as their tapestry to create settings and paint performances with mood enhancing light and sound. Daniel Butler was one of those artists. The National Blues Museum and the Sheldon Concert Hall were his home away from home. His sudden passing at the age of 55 stunned the blues community.

Butler, the youngest of nine children, grew up in a mid-city four-family flat on Etzel street with a love of art. His life partner Juliette Yancey said, “He really had an artist’s soul. His mom was a homemaker and his dad a workingman so she didn’t get many flowers, but Dan would draw her flowers and frame them.” She and a high school art teacher encouraged his talent. Butler would walk from his home to the St. Louis Art Museum to study the artwork and draw. It led to a high school internship at the museum.  After graduating from Southwestern High in 1982 he applied for the museum’s auditorium coordinator position.

Even though he had no experience, Butler had impressed them with his love of art, skills and his “I can do it,” attitude. During his years there (1983-2001) and on other stages in town he learned stagecraft, the stagehand work that covers everything from building sets to lights and sound. Eventually his resume would list stage craft union affiliations (IATSE) with Stagehands Local 6, Projectionist Local 143, Studio Mechanics Local 493 and IBEW local 4.

In the mid 80’s Butler honed his sound skills with Reggae at Will (RAW) as their soundman. When he met Charles “Babatu” Murphy, a member of St Louis’ first reggae band the Infrared Rockers, he found a sound brother. Murphy laughs at the memory: “It was a friendly competition between the bands. Dan and I shared a passion for sound. We were always comparing notes. We liked to look things up and learn whatever was needed for the best possible sound for an audience.” They would lose touch, but the bond was always there.

Through the 90’s Butler became a craftsman working his way through the arts community: He was a carpenter with The St. Louis Black Repertory Company and Stages St. Louis, and a Stagehand, Lighting and Technical Director with the St. Louis Ballet, the Opera Theater of St. Louis and Ballet Midwest. He even shared in a 2006 Mid-America Emmy as a photographer for "Conversation with Paul Rusesabagina.”

Butler moved to the Missouri History Museum (2001-2007) as their AV coordinator. It was the Emerson expansion era with a new auditorium and new productions including Twilight Tuesdays. The museum was also the place he would meet two important folks in his life, Jackie Dace the African American History curator and a writer who would become his partner, Juliette Yancey.

Dan and Juliette first met in 2000 but didn’t begin dating until 2005. Later they settled down together and started a family, Brandon (2011) and Arabella (2014). Juliette recalled those times: “Dan was older and never thought he would have a family. When we did, he was thrilled. He was an awesome devoted Dad. He would turn down big money jobs for family. Our last conversation was about back to school, what hopes we had for the year and about his talking to Brandon about being a good big brother for Bella as she started school.”

Yancey also spoke about how Butler looked at his own work: “He used to say, 'I’m a jack of all trades and a master of none,' but later he began to say he didn’t like that because he did work hard to master each of his areas of expertise. He would tell me, ‘When I die, I going to be a legend in this town.’”  Her take spoke to the artistry and his love of photography and drawing: “The artistic ethic never left him; he just transferred it to the technical side of things … the stagecraft, the sound, the lighting. He was such a sensitive soul it was why he connected with musicians. He saw things through an artist’s eyes or a musician’s ears.”

Settling down coincided with Butler’s becoming a regular at The Sheldon Concert Hall where he became fast friends with his boss, Tim Albert (Uncle Albert): “We worked together for more than 10 years. He was my friend and right-hand man. I never had to worry. He was one of the best lighting guys in St. Louis and the only guy I trusted to slide into my chair at the soundboard. Dan always had my back. He was in demand because of his many skills. What was unusual was we would get calls from national touring acts that would request Dan. They had worked with him before. Very unusual. No one does that. He was a proud black man who was willing to try and change his small part of the world.”

The National Blues Museum opening brought all the pieces together. Jackie Dace, the NBM Internal Affairs Director, knew Butler from the History Museum. She recruited him to the Legends Stage to work with another tech, Charles “Babatu” Murphy. It was a joyous reunion. “One day Jackie brought in Danny to introduce us to each other," Murphy said. “Man, we just cried and hugged each other. It had been 30 years. As we worked together, we realized how much we shared. We learned from each other to take things to a new level. It was all about sharing and learning.”

They tuned the room and found a new friend in Terry Hardin, the Operations Manager for the museum. Together they made the stage and sound shine. “Dan and I had been on parallel paths,” Murphy said, “It was destiny. I taught all kinds of career and technical ed in production technician skills. Dan was way ahead on all kinds of technical skills because of the work he did.” They helped open the door for African American students like Josh Reynolds who said: “Dan was an awesome, funny, well-spoken guy. It was an amazing educational experience with them. I got to do everything from the soundboard to camera work to stage set up.”

On August 2, 2019 Butler had spent the morning setting up for the St. Louis Philharmonic Orchestra. He went home to take a nap before the show and never woke up. Word quickly spread through the blues community. An August 17 memorial was held at the NBM. Terry Hardin was emcee for the event. Tim Albert and Jeri Peterson spoke from the stage with Adrienne Petty offering a prayer.

Peterson, a longtime friend from St. Louis Black Repertory Theater production of Ma Rainey’s Black Bottom Blues, told how Dan’s business card stated, “I’ll make your artistic dreams a reality.” “He was the gold standard when it came to sound and lights,” she said.

Brittany Perry, the daughter of Butler’s best friend, Anthony, told how Uncle Danny inspired her. “He was interested in my art when I was a kid,” she said, “he taught me a hand tracing technique to help my drawing. Today I am a school art teacher because of what he cultivated in me.”  It was the same technique he had recently taught his son, Brandon, to help him with his handwriting.

Onstage, Murphy completed the circle with another gathering of old friends. The Infrared Rockers which today includes a couple of former RAW band members provided the reggae. He also produced a moving video tribute that can be viewed here. Of the many heartfelt tributes for Butler it was Terry Hardin’s post, Soul Heaven Has a Production Technician, that spoke for many at the memorial:

“My heart is heavy, but I'm at peace knowing how it went. Whatever Dan had just finished, I know he did it to the best of his vast knowledge and abilities. He worked with the best in the business and shared that with us and his proteges. He was always the consummate professional. As humble as he was though, he always said ‘Without 'Tu (Babatu) there wouldn't be a me.’ Dan cared how you sounded, live and on the stream, whether you were talking, playing your genre, or just a visiting high school orchestra. I Love You, and I'm going to miss you, Brother! You are now at Peace.”