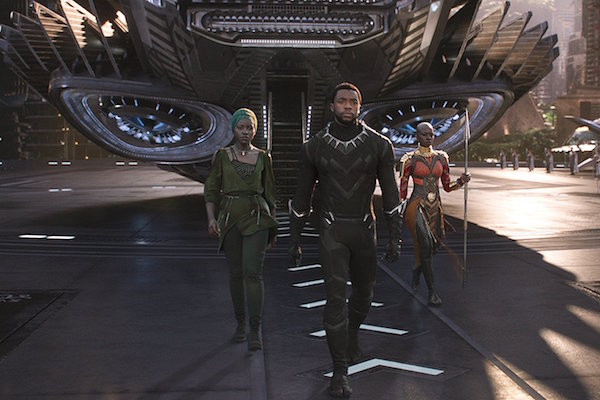 Since the 2014 announcement, eager fans have waited with great anticipation for director Ryan Coogler's "Black Panther." I won't bury the lead: the film merits the hype and the record-breaking advance ticket sales. It is terrific in so many ways, enhancing the conventional superhero dichotomy of good and evil with conflicting loyalties in three-dimensional, culturally grounded characters.

The conflict and surprises (no spoilers here) begin in Oakland, California, 1992 on an outdoor basketball court before moving indoors to a small apartment. Even this simple setup has a strong payoff, contrasting dramatically with the astonishing, high tech world of Wakanda, that fictional African country headed by Prince T'Challa, King now that his father has died. Wakanda citizens have prospered thanks to vibranium (kept a secret), the strongest metal on Earth with energy transforming powers.

This is the world of Afrofuturism, a term used since the 1990s to describe a heady mix of Afrocentric science fiction, fantasy, and arts. Mythic Afrofuturistic aesthetics posits an alternative utopic future, not without profound conflict in stories infused with relevant social critiques, notably use and abuse of power. This may all sound philosophically esoteric. Enter then "Black Panther" that thrills and inspires in every scene, making vivid and enthralling the personification of these ideas.

The engrossing characters go beyond good and evil, so common in superhero movies. Even the admirable men and women have competing loyalties, to family and country. Difficult choices play out as combats ensue. The acting is superb, with Chadwick Boseman as T'Challa, i.e. The Black Panther, anchoring. A stellar cast of young and veteran actors hold forth: Michael B. Jordan as Erik Killmonger, Lupita Nyong'o as Nakia, Daniel Kaluuya as W'Kabi, Angela Bassett as Ramonda, Forest Whitaker as Zuri, and Martin Freeman as out of his element C.I.A. agent Everett Ross. Snappy dialogue energizes exchanges, and the equal involvement of strong women in an array of roles is marvelous: a love interest, a sister, a mother, and formidable warriors with brains and power.