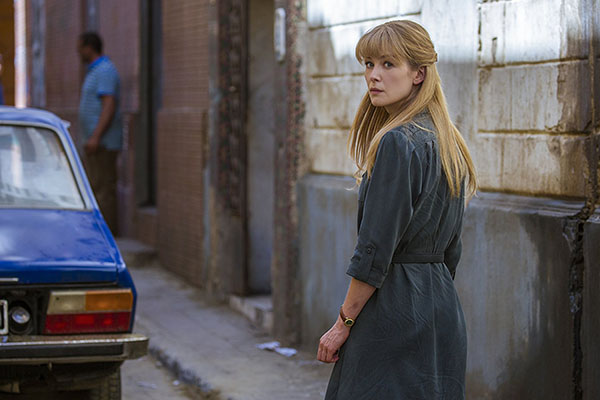 'Beirut' paints a retrograde picture of Lebanon and US heroism

As the story set in and simply called "Beirut" begins in 1972, cultural attaché Mason Skiles hosts a lavish formal reception and dinner at the U.S. embassy. Mason clearly enjoys sharing the event with his wife, thirteen-year-old Palestinian ward Karim, and colleagues. Suddenly and catastrophically Mason's world will be destroyed, and a politically retrograde plot set in motion.

Cut to 1982 to find that Mason, often called Mase, has retreated from diplomatic life to negotiate domestic labor/union conflicts as he mutes his despair with alcohol. But, in a clichéd development, when the PLO kidnaps former colleague Cal, Mase must return to Beirut to save his friend. He's aided by CIA agent Sandy Crowder who scrambles to keep Mase safe even as top diplomats and agents argue different agendas. Steeped in mid-East mayhem, this rescue mission moves quickly, relying on close-ups to convey emotional as well as physical conflict.

The clichéd story of the reluctant hero pulled back in one more time is delivered effectively. As Mason, native St. Louisan Jon Hamm conveys a desperation mixed with confusion. There's none of Don Draper's "Mad Men"  swagger as Mase must negotiate Beirut's convoluted politics and bombed-out rubble. Working to save Cal, Mase also clashes with a contentious embassy staff. Nevertheless, he represents American loyalty and superiority, while the Palestinians espouse terrorism and brutality even against their own.

Therein lies screenwriter Tony Gilroy's Achilles heel, which director Brad Anderson exacerbates with an absence of nuanced Lebanese characterization. The fundamental dichotomy of good versus evil, the West versus the Middle East, ignores the complexity of the Lebanese Civil War during the decade "Beirut" spans. Israeli, Arab, Christian, Syrian, PLO and American advocates all had a stake as factions forged shifting ties. No, this isn't a documentary, but it would benefit from delving deeper into issues.

It must also be noted that the fine actress Rosamund Pike is wasted as the CIA's Agent Crowder. Again, stereotypically, the supporting female has few lines and little to do, though thankfully she is not overly sexualized. "Beirut" is a political thriller that can boast suspense and tension, albeit devoid of complex content. At Landmark's Plaza Frontenac Cinema.