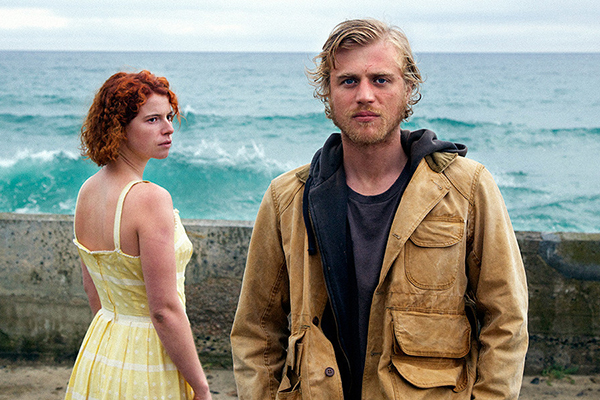 Throughout writer/director Michael Pearce's feature film debut, "Beast," Moll struggles with violent behavior visited upon others and herself as an eruption of her internal rage. Upstaged at her twenty-something birthday party by her newly pregnant sister, Moll reveals the depths of her troubled psyche as she crushes shards of the glass she accidentally breaks into her hand.

Moll flees the scene and soon connects with the equally antisocial Pascal, hunting rabbits and saving her from a sexual aggressor. Their volatile relationship infuses subsequent action with unnerving psychological tension. Unexpected developments prevent me from saying more about events except that a serial killer of young women terrifies the community and a crime Moll committed at 13 is gradually revealed.

The pas-de-deux between Moll and Pascal has a rare emotional register due primarily to Jessie Buckley's astonishing and frightening performance as Moll. She hides behind a calm façade, her eyes the cautiously veiled signal to her agitated emotions, especially when her brittle mother (a fabulous Geraldine James) interferes. As Pascal, Johnny Flynn remains a cypher, his full, past criminal history withheld though he's unmistakably harboring profound antisocial tendencies. The mystery builds through good editing and abbreviated access to what these two really think and feel, despite their mutual attraction.

The physical isolation on the isle of Jersey (the largest English Channel Island located close to France) echoes Moll and Johnny's psychological detachment. Adding another analogy, in an opening voiceover Moll talks of her childhood obsession with whales, noting that in the wild they can travel 100 miles a day in the ocean but in captivity some go insane. She says one broke all its teeth trying to break free. A heavy-handed metaphor, the parallel hits hard as a psychologically and physically ensnared Moll spirals downward. Again, with unambiguous connotations, when Pascal saves Moll, he sees her bloody hand and says, "You're wounded. I can fix that." Can he?

His efforts present an intriguing challenge, all the more captivating because in real life we attempt to fathom marginal and destructive individuals. Is Moll the beast of the title or does society lack the support, understanding and kindness needed? Quite rightly, "Beast" doesn't offer facile answers in its steady gaze. At Landmark's Tivoli Cinema.