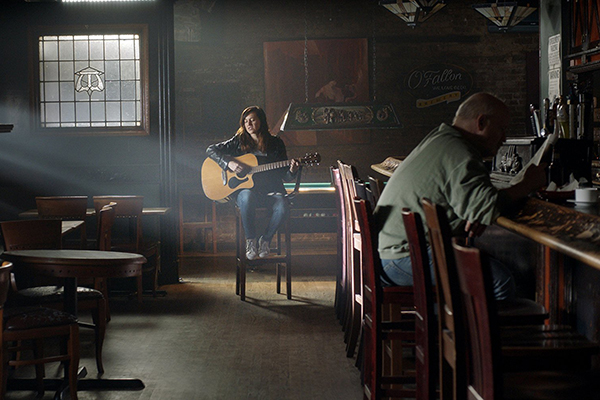 Set in St. Louis, former St. Louisans Elizabeth Rohrbaugh and Daniel Powell's feature film debut "Becks" captures its title character in a familiar crisis, the jarring discovery that her partner betrayed their relationship. Reevaluating and searching, Becks moves back in with her mother in Maplewood, reconnects with friends, teaches guitar and sings at local bar Perfectos.

After a brief, introductory, quietly confrontational scene in L.A., Becks will cautiously navigate her contemporary circumstances with a disapproving widowed, ex-nun mother who argues and listens without any phony, improbably grandiose opening of her mind and heart. Amidst often awkward reintroductions to her former high school pals, Becks is hanging on, finding herself in this honest, appealing profile that respects the daily struggles of a resilient, but adrift woman.

Even though "Becks" was shot principally in New York, it's still great fun to savor faux local ambiance and to pretend we're in St. Louis. Cinematographer Kat Westergaard confers a refreshing authenticity to modest homes, bars and stores, conveying a totally different feel from Hollywood settings. Technical details also complement this refreshingly modest, relaxed film. It's enjoyable to hang out with these individuals.

Winner of the U.S. Fiction Award at the LA Film Festival, "Becks" and screens at Webster University’s Winifred Moore auditorium Friday, June 8 through Tuesday, June 12 at 7:30 each evening. For more information, you may call 314-968-7487 or on the web at: Webster.edu/filmseries.