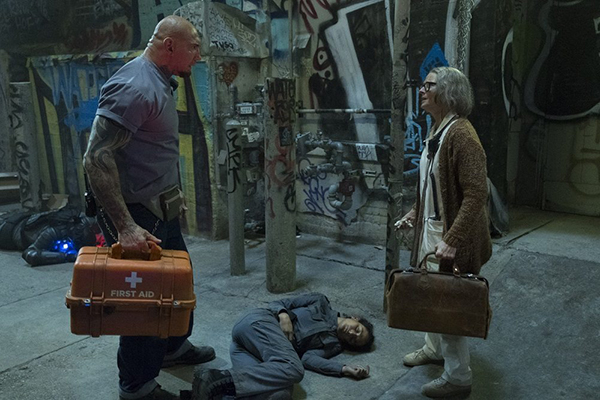 'Hotel Artemis:' Can You Spell 'Dystopia?

Chances are you are not likely to see a movie like "Hotel Artemis" any time soon. Yes, it can be classified as science fiction in the subcategory of dystopia, and, because it's set in 2028, it shares aspects of futuristic films and violent film wherein things blow up good.

But the plot and backstory of "Hotel Artemis" are intricate, the characters interesting and camera work is masterful inside this black and red color scheme.

Ten years hence, the city of Los Angeles is under siege. Constant riots over water have left the city little more than bundles of graffiti'd concrete with cops fighting criminals or protesters, depending on your point of view. An odd oasis in this war is the Hotel Artemis, each suite named for an exotic site, such as Waikiki or Nice and some of the inhabitants are known only by their room name.

The hotel serves as a hospital for criminals, who have to be members to avail themselves of the mending services. Running the medical staff is Jean Thomas, known better as Nurse. Played extraordinarily well by Jodie Foster, Nurse is first seen through the amber of booze in a bottle. She sets the rules – no guns, no cops, no killing the other patients – but she relaxes those rules when a cop who knew her son demands help.

That cop, played appealingly by Jenny Slate, joins a criminal, played by Sterling K. Brown, who's there for his brother, but who knows an interloper, a professional killer with an agenda. Sofia Boutella gives dimension to the woman assigned to pick off the owner (Jeff Goldblum).

Drew Pearce brings his knowledge of action films from "Iron Man 3" and "Mission Impossible" and he moves his cameras in close to wounds and arsenals. Pearce's dialogue duplicates the speed of scripts by Aaron Sorkin and Amy Sherman-Palladino. The Nurse's ripostes and epigrams are embroiderable and often funny.

"Hotel Artemis" is witty and scary and demanding and loud. Blessedly, it's barely 90 minutes long so the fitting violence is tolerable.