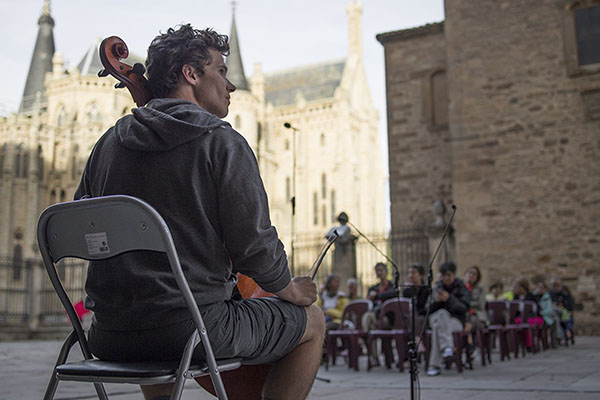 'Strangers On The Earth' Travels Along the El Camino de Santiag

As long ago as the ninth century, pilgrims have walked El Camino de Santiago, commonly known as the Way of Saint James, to arrive, as legend holds, at that apostle's tomb in the Santiago de Compostela cathedral. The traditional pilgrimage of up to several hundred miles begins in the French Pyrenees, with a check-in procedure for this European Heritage Route.

Director Tristan Cook's documentary "Strangers on the Earth" very briefly summarizes the El Camino's history and then excerpts moments from several pilgrims' treks. Most display the Camino's iconic scallop shell with each stripe symbolically ending at one point, St. James the Great's venerated tomb on what once served as a Roman route. Early on, as an act of penance, Emperor Charlemagne walked from France. Today some share that religious motivation for their travel, some are nonbelievers. Some say they seek self-knowledge, some want to share and open their minds. Many say they are dealing with a sense of loss in today's world, literally or figuratively. A multitude of reasons motivate these pilgrims from all over: Japan, Scotland, Korea, Ireland, Germany, etc. One says walking to Santiago is like traveling through a rainbow. Another, the American Dane Johannson, carries his cello, playing at stops along the Way for appreciative fellow travelers.

In many ways, "Strangers on the Earth" feels like participants' home movies with physical activity the stimuli for largely mundane emotional and psychological discoveries. On-camera observations offer few surprising insights, though the exploration is certainly admirable. For those who have made the Camino de Santiago pilgrimage, revisiting Navarre, La Rioja, Burgos, Palencia, Leon and finally, Santiago will evoke a pleasurable nostalgia. The rest of us may be prompted to undertake such a venture, knowing more about the demands and the rewards.

"Strangers on the Earth" screens at Webster University’s Winifred Moore auditorium Friday, June 15 through Sunday, June 17 at 7:30 p.m. each evening. For more information, you may call 314-968-7487 or on the web at: Webster.edu/filmseries.