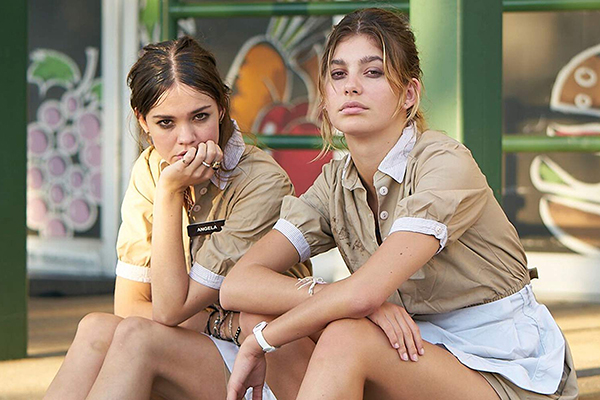 'Never Goin' Back' asks "Why go in the first place?"

It is possible to wanly applaud "Never Goin' Back" for flipping a male-based stoner plot into female. However, that does not make the first plot better nor the second plot worthy. It just causes disgust at the male-centric plot of irresponsible, drug-addled teens setting out on a losing spree.

Jessie and Angela, high school drop-outs, live with two dissolute dudes, one a brother of the two best friends. They are best friends, the kind where one can draw male genitalia on the face of the other and the other laughs hysterically at the graffito on her face. They work at a restaurant touting home-cookin' on the neon sign. They do not enjoy work. In fact, they are working only to pay the rent. Only Jessie decides that she's going to give Angela her lifelong (with life not breaking through yet to the 20s) dream of vacationing at the beach. Hey, it's only Galveston, but it's a beach!

Jessie uses the rent money to buy the vacation. Angela is not best pleased at first, but she comes around. So, too, do burglars, who break into their bungalow. Then, the young women are arrested, but one of them cannot go to the bathroom in jail, so there's that fecal matter added to the poopy plot.

"Never Goin' Back" has only the tiniest redeeming virtue in one late scene. The rest is just excelsior, straw filling an empty box for padding.

Maia Mitchell, an Aussie, and Camilla Morrone, with a lot more film experience than her colleague, play the dissolute teens. That you have no trouble believing the characters' actions may say something about the actresses' abilities. Neither, however, do you care. Writer/director Augustine Frizzell, daughter of country singer Lefty Frizzell, has not made the young women interesting or distinguished, either through writing or directing. Instead of "Never Goin' Back," don't go in the first place.