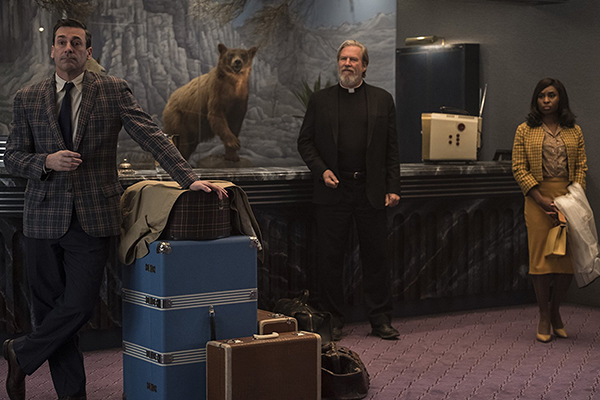 "Bad Times" is ostensibly a thriller about a hotel, half in Nevada, half in California. At the outset, that's kinda funny because the thick red line demarcating states runs through the parking lot and the lobby. Guests get to pick which state to stay in, but since most of the rooms have not been serviced and the others run along an observation corridor, it's not a choice.

The guests include a lying priest, a sweet singer, a vacuum cleaner salesman with a neck as still as Ed Sullivan's, a pair of sisters, and an evangelist. Granted, the evangelist has a half-naked body that provides something to look at besides blood, but he's mean and horrid without a redeeming virtue. He's Chris Hemsworth, who postures more than he acts.

Dakota Johnson plays one of the sisters and Jon Hamm puts on swagger and a country accent to sell vacuums, but those are not the only things about this character that sucks. Jeff Bridges must have had a mortgage payment due to play the priest-like man. He interacts with the hotel clerk, played by Lewis Pullman, who's desperate to confess. Singer Cynthia Erivo plays the only good person in this circle of hell.

Drew Goddard wrote and directed "Bad Times" with pretensions of being David Lynch married to Dante, sleeping with the Devil. Goddard wrote the screenplay for "The Martian," but he's not ready for the big time if "Bad Times" shows what he can do. As director, he used flashbacks and fire, layered over repetitions as each character revisits his or her part of the apocalyptic story. The bloody result is more Grand Guignol than good. Bad times, indeed.