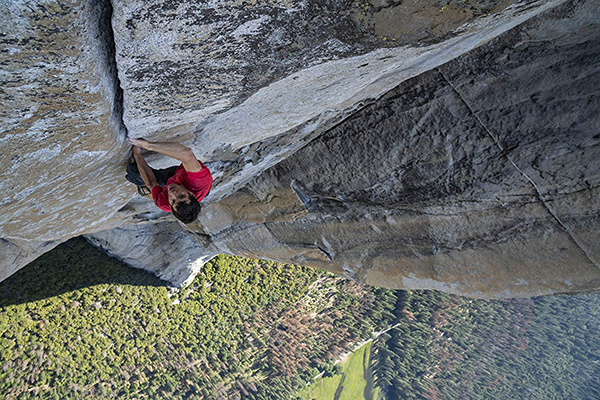 'Free Solo' is breathtaking and terrifying

Elizabeth Chai Vasarhelyi and Jimmy Chin's documentary "Free Solo" profiles Alex Honnold, the climber who admits often considering free climbing El Capitan, Earth's most impressive, 3200-foot granite wall. But, as Alex repeatedly said to himself, "That's just too scary." Nevertheless, he knew he had to attempt it, insane as the idea is because there is zero margin for error.

Free climbing means climbing without a rope, just good shoes and a bag for chalk, relying on physical stamina and expertise. As Alex's friend, fellow climber Tommy Caldwell explains, "It's an Olympics' gold medal achievement that if you don't get the medal, you will die. Your whole life depends on one foothold, and you have to do everything perfectly." Even climbing El Cap with secured ropes proved so daunting that it wasn't accomplished until 1958, taking 46 days over 16 months. The first continuous ascent in 1960 took seven days.

Many people, who remember the "60 Minutes" segment on Alex and other news coverage, think they know his story. I thought I did. But "Free Solo" opens up Alex's world: his girlfriend Sanni McCandless who caused an accident giving Alex two compression fractures plus her psychological impact, Alex's mindset crucial to forge ahead, and the photographic crew's reactions to all this. As in the documentary "Meru," Jimmy Chin's stunning photography, along with that of Clair Popkin and Mikey Schaefer, is sufficient to cause most of us mortals vertigo. It beautifully captures the environment and the danger, a danger added because of the presence of the crew.

Free soloing is categorically insane and this film fills in the details while also capturing Alex's justification. Fewer than 1% of all climbers free solo and all who made it a central part of their lives are dead. Alex explains that you take something dangerous and make it feel safe, that this attitude toward risk makes you feel invincible. Add to this that an MRI on his brain's emotional center, the amygdala, shows limited activity, expanding his comfort zone. Alex describes himself as part of the warrior culture, feeling no need to maximize his life span, only to perform. I realize after watching "Free Solo" that there is no way for me to comprehend what Alex will attempt, as we watch, June 3, 2017. It is breathtaking and terrifying. At Landmark's Tivoli Cinema.