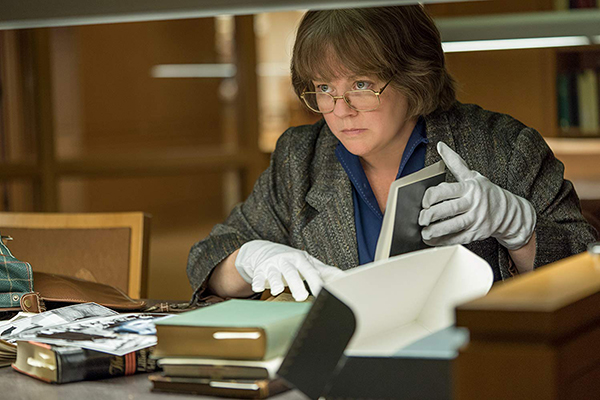 'Can You Ever Forgive Me?' highlights Melissa McCarthy's dramatic gifts

We who know Melissa McCarthy as a brilliantly talented comedic actress will expand our categorization with her dramatic performance in "Can You Ever Forgive Me?" McCarthy plays the real-life Lee Israel, in her 50s, living in Manhattan's Upper West Side, eking out a living writing biographical histories. Tough times and her abrasive personality propel her into a downturn.

Soon desperate for money in an expensive 1990s New York, her beloved cat ill, Lee accidentally learns of the value of famous authors' letters. And so she begins cleverly composing and convincingly forging for the likes of Dorothy Parker, Oscar Wilde, Noel Coward and Edna Ferber. Lee will descend progressively into lies and deception, buying old typewriters and imitating personalities. Director Marielle Heller keeps the camera and the events centered on Lee who soon strikes up a mutually profitable connection with Jack Hock, a gay hustler incapable of resisting a handsome face or an attractive body.

Asked at Telluride (where I saw the film) if Lee's argumentative, unlikable personality bothered them, both director Marielle Heller and McCarthy pointed out that male actors regularly embrace such characters and so did they. In fact, McCarthy said she purposely resisted toning down Lee's antisocial, caustic, angry and miserable attributes. It is striking, then, that McCarthy's award-worthy performance as a decidedly unlikable woman is exactly what makes Lee Israel so captivating. McCarthy's brilliance ranges from every nonverbal detail, especially her walk, to her unmitigatedly strident, sour disposition. Her opposite, Richard E. Grant as Jack is hilarious, stunning, and equally desperate to make money through the con. He deserves a Best Supporting Actor nomination.

The title, "Can You Ever Forgive Me?" comes from one of the letters and expresses what should be Lee's final plea, if only she could feel any regret for her actions. The real Israel acknowledged, "I shouldn't have conned people, but the work was good ... It was my best work." Translating this to action, screenwriters Nicole Holofcener and Jeff Whitty must and do use precise words, a joy to listen to. The art direction adds more atmosphere, rewarding hunting for those old bookstores that enfold customers in their musty, dusty world. This is a film to relish: entertaining as well as provocative. Check listings.