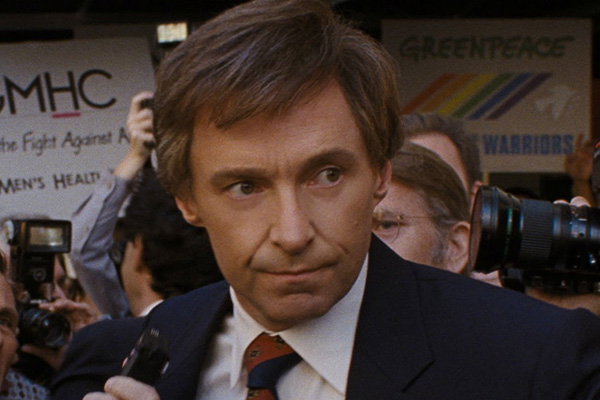 'The Front Runner' interrogates a watershed moment in media coverage

In mid-1987, leading to the Democratic nomination of its 1988 Presidential candidate, Gary Hart was poised as the solid, impressive front runner. Director Jason Reitman takes that designation as the title for "The Front Runner," an even-handed dramatization of watershed moments in media coverage of candidates; for during reporters' unprecedented pursuit of Hart's private life, the landscape shifted forevermore.

Based on Matt Bai's 2014 book "All the Truth Is Out: The Week Politics Went Tabloid," Bai, political strategist Jay Carson, and director Reitman heavily researched every detail of the ruinous May 1987, Miami Herald exposé of Hart's alleged affair with Donna Rice. Verisimilitude extended to background minutia and even to extras working the phones, saying exactly what was said to encourage voters to vote for Hart. More importantly, hours of conversations among the writers, Reitman and Hugh Jackman, who plays Hart to perfection, explored the character of this complex, enigmatic man. There are good/evil dichotomies here, but (as Reitman, Jackman, Bai and Carson discussed after their premiere screening at the Telluride Film Festival where I first saw the film) it's the shades of gray that dominate.

Significantly, Hart's last speech in the film is word for word as delivered. It remains immensely moving, even unnerving in today's environment, though no histrionics accompany any of these historical moments. In fact, none of the sensationalistic photos appear. Instead, Reitman immerses us in the 1980s campaign, cinematographer Eric Steelberg shooting with equipment available then in the period style. We're there, captured in the moment. Similarly, avoiding the temptation to overplay emotion with elaborate musical accompaniment, Rob Simonsen perfectly matches the undemonstrative drama with a minimalist piano score. Less is more.

Scenes ricochet from campaign planes to hotel rooms, campaign headquarters to newspaper offices. Twenty main characters merge perfectly: in addition to Hugh Jackman as Hart in what must be an Oscar-nominated performance, there's Vera Farmiga as Gary's wife Lee, J.K. Simmons as campaign manager Bill Dixon, Sara Paxton as Donna Rice, and Alfred Molina as Ben Bradlee, as always debating the ethical route. "The Front Runner" is brilliant and engrossing on its own terms. With its unmistakable relevance, it's downright disturbing.