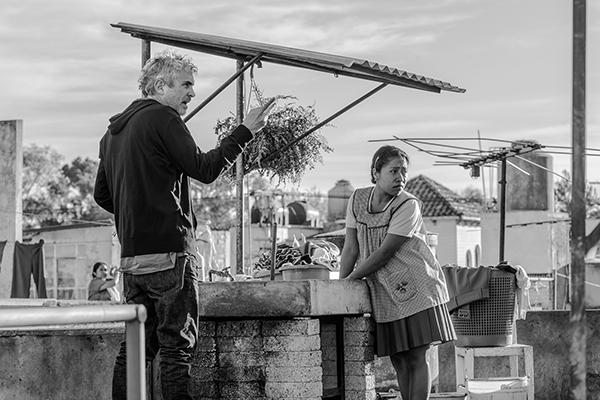 'Roma' is an Autobiographical Masterpiece

Director Alfonso Cuaron has an impressive filmography, including ‘Y Tu Mama Tambien,’ ‘Children of Men,’ and ‘Gravity’ -- all masterfully executed. However, Cuaron’s autobiographical new work, ‘Roma,’ is his masterpiece. The piece succeeds most in its authoritative presentation of the director’s upper middle-class Mexican upbringing, especially his enduring affection for his nanny Libo, called Cleo in the film, from whose perspective the family’s life unfolds.

Over a momentous year in the early 1970s, personal and political crises impact the community portrayed in the movie, as well as the central characters: affairs, separation, divorce, pregnancy and violent street protests. Cuaron communicates these upheavals exquisitely, poignantly, thoughtfully. Memory is the touchstone of the loosely organized narrative, which is infused with subtle symbolism -- from Cleo’s opening scene mopping the narrow, claustrophobic car garage to the return of a water motif in the late, terrifying ocean scene.

Cuaron himself shot ‘Roma’ in gorgeous black-and-white, with long takes and flowing camerawork always landing at the exact right place to reveal interactions. His minimal use of close-ups allows events to unfold realistically, without intrusive editing guiding us toward predetermined emotional conclusions. Along with Cleo, we watch and react to this family. At Telluride (where I first saw ‘Roma’), Cuaron said that he did not think of Libo as a surrogate but as his real mother, more so than his biological one. After all, who constitutes our family? And who is there for us?

Writer and co-editor, as well as director, this is more than Cuaron’s experiences. Percolating for over ten years in Cuaron’s mind, the film is his very personal exploration of the devotion of the family’s maid juxtaposed with events from her periodically tumultuous world, one very different economically and emotionally from his own. The title ‘Roma’ identifies the Mexico City neighborhood where he grew up. But his tribute, as he has said, to the women who mattered in his life reaches far beyond the particulars of this fond remembrance.

In her first film, Yalitza Aparicio, an indigenous school teacher from Oaxaca who said at Telluride that she was so proud to hear her native language used in the film, guides and dominates as the housekeeper, Cleo. ‘Roma’ is, hands down, in the top cinematic tier.