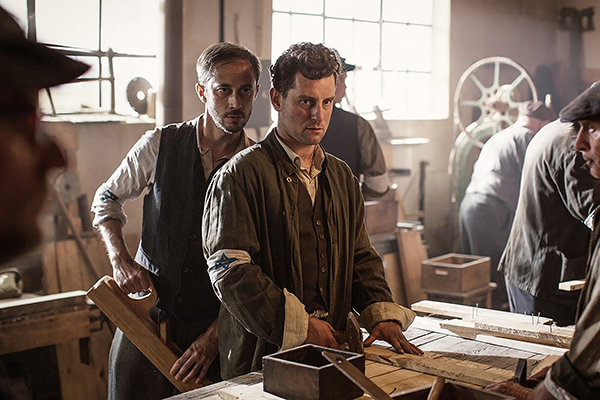 'Who Will Write Our History?' Stuns

Last month, Peter Jackson's 'They Shall Not Grow Old' stunned moviegoers with its innovative restoration of vintage films from WWI. On Sunday, January 27, prepare to be amazed again at a one-day showing of another reimagining of cinematic memorabilia, this time recorded stories of World War II.

The backstory is this: In November 1940, Nazis forced 450,000 Polish Jews into the Warsaw Ghetto. To tell their stories, a clandestine band of journalists and scholars, led by historian Emanuel Ringelblum, rebelled against the Nazi propaganda declaring Jews hairy, dirty, and undesirable scum. Ringelblum asked, "Will Germans write our history or will we?" To off-set the lies, Ringelblum and his cohorts collected eye-witness accounts from the Jewish perspective, and in the end, provided documents for persecution of the persecutors.

The documents – personal stories, drawings, clippings – were buried in three archival boxes, only two of which were unearthed after Warsaw was bombed to smithereens.

Director, writer, and producer Roberta Grossman tells the story of the project, code-named Oyneg Shabes, or "the joys of Sabbath," based on Samuel Kassow's book. Grossman interweaves archival films with reenactments. For once, the recreations are not embarrassing. It works. That's partly because scenes, shot in Poland, L.A., and Atlanta, are cast behind actors reading significant words from diaries and narratives. The actors include Joan Allen as writer Rachel Auerbach and Adrien Brody as Ringelblum, adding just the right amount of vocal drama to inherently tragic scenes.

"Who Will Write Our History?" plays on Holocaust Remembrance Day, at 1 p.m. on Sunday, January 27 at Plaza Frontenac.