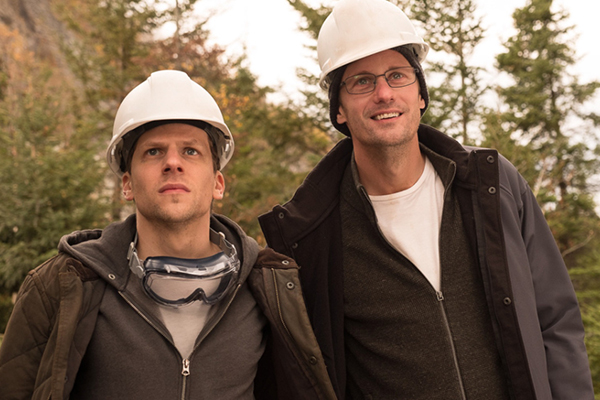 The Canadian Kim Nguyen wrote and directed this disappointing project, which reveals the underworld of high-frequency trading. If that last prepositional phrase stupefies you, prepare to have the whole of the film be an alley-oop sailing over your head.

Among the disappointments is that Jesse Eisenberg, so good in so many other movies, is wretchedly miscast as the hustler. As Vincent Zaleski, he plays a stock trader trying to best his rivals. His goal is to run a fiber-optic cable from Kansas to New Jersey to buy time in trading. Here, time is measured in milliseconds. Vinnie is the business brains of a duo; the other half, his cousin Anton, played by Alexander Skarsgård, is the coding brain. Autistic Anton is charged with figuring out how to shave that millisecond off the time it takes for information to cross the country so that traders can deal faster to make more millions. The Zaleskis compete with their former boss, played imperiously by Salma Hayek, her voice clicking like her high heels. Michael Mando from 'Better Call Saul' plays the Zaleskis' lieutenant.

But, just think about it: to drill a tunnel from Kansas to New Jersey involves rivers and mountains and, the biggest nemesis for these two, the Amish, here led by Johan Heldenbergh. To add conflict, Nguyen gives Vinnie a medical malady, sensitive to time as well. So everyone is racing, beating as fast as a hummingbird's wing.