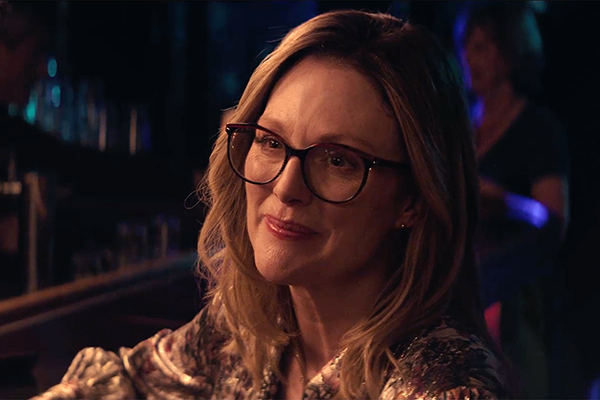 It's not unusual for a film to show a woman naked while a male covers himself daintily, but in 'Gloria Bell,' those scenes are symbolic. Gloria Bell is open and accepting, but her new lover Arnold is secretive and ungiving. Director Sebestián Lelio calls 'Gloria Bell' a "cover" of "Gloria."

The Chilean director Lelio made 'Gloria' in 2013. 'Gloria Bell' is not an exact copy but a fine rendering of a real woman who would be on the cusp of cliché under other acting and directing hands. Gloria Bell, an efficient insurance agent, is a divorcée who likes to drink, dance, and smoke. Her impecunious mother and two dour children go their own ways in confusion.

At a dance club, Gloria meets a stranger across a crowded room. They are unsure how to manifest their attraction after making love. They ebb and flow, they laugh and love, they separate and remagnetize. They try. Only one is the victor.

As Arnold, more sincere than sensational, John Turturro shows subtleties of longing and sticking. As Gloria, Julianne Moore shows why she is such a definitive actress, whether at working, bedding, or taking sweet revenge. Just regard Gloria's face when she finally smokes a cigarette after yoga. These two are supported by a remarkable cast, including Michael Cera, Holland Taylor, Brad Garrett, Rita Wilson, Jeanne Tripplehorn, and, amazingly, Barbara Sukowa, so fine as Hildegard of Bingen in "Vision" and Hannah Arendt in that biopic.

Matthew Herbert's music demands attention as it did last year in Lelio's 'Disobedience,' also about a woman on the run. In 'Gloria Bell,' Lelio's cuts and script let the audience figure out what's happening, and he says as much by what he does not film as by what he does. He creates a rom-com – the silliness of a naked cat posed next to passionate love-making, but he adds drama in the title character, Gloria Bell, a grown woman.