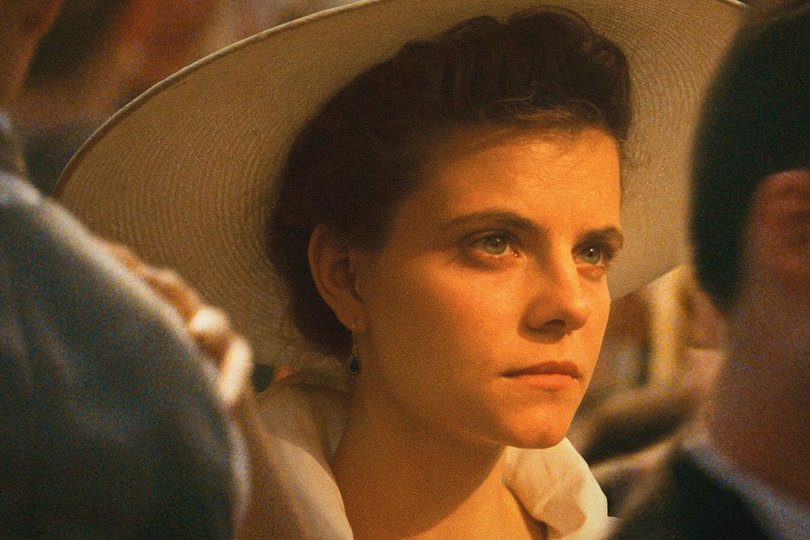 In 'Sunset’s' opening scene, in medium-close-up, the veil on Irisz Leiter’s hat is raised to reveal her impassive face, metaphorically suggesting Irisz’s confronting her 1913 Budapest world head on. This will prove to be a difficult endeavor, for no one explicitly describes past events nor do they directly address what will occur over the next two and third hours.

True to his style in 'Son of Saul,' co-writer/director László Nemes puts us on the periphery of dramatic events, with cinematographer Mátyás Erdély’s camera all but glued to Irisz’s shoulder as she glides through the Leiter millinery shop or is jostled in crowded Budapest streets. Irisz has returned from Trieste to reinsert herself into her family’s business, where royalty inspects the coming season’s elegant hats and orders, perhaps, one of each.

Ready to celebrate the shop’s thirty-year anniversary, the manager does not welcome Irisz, orphaned at two when her parents died in a mysterious fire. Irisz will learn she has a brother, will seek him, and will stumble into a cell of terrorists who resent the upper-class façade and violently act to destroy it. Irisz observes and is observed in long takes, a shallow depth of field keeping only her in sharp focus as our conduit into events she, and therefore we, find perplexing as she struggles to understand connections and conflicts. Clearly the Austro-Hungarian empire, identified in opening titles, staggers toward collapse in fits and starts, while hanging on to an oppressive semblance of refinement. Director Nemes cryptically suggests all this, never overtly offering more than a fleeting indictment through the reformists’ objections to the beautiful veneer masking exploitation and cruelty.

I’ve seldom felt so surrounded by activity in street scenes, most defined by the jostling of citizens and the sounds of wagons going by, horse whinnies, hooves on cobblestones as Irisz travels in carriages, and workers at various trades; in other words, the art direction is superb. So too is the costume design along with the exquisite hats. Irisz’s hypnotic, dream-like movement can cast a spell, as it did for me, though abandoning hope of any narrative drive or logic is required.