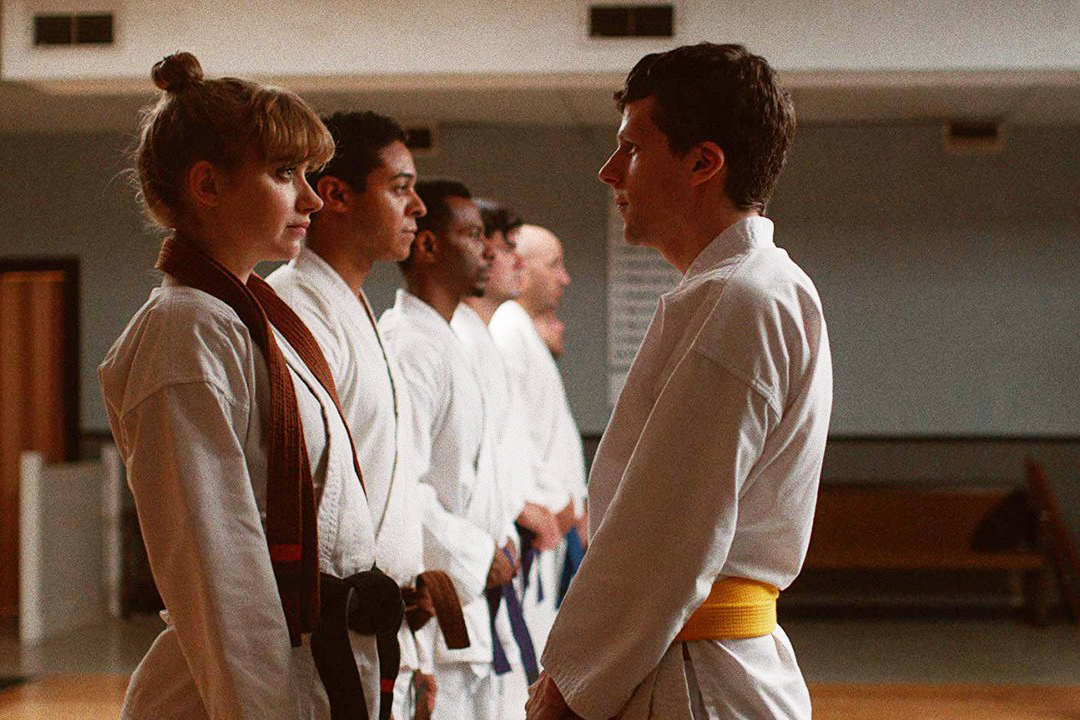 ‘The Art of Self Defense’ Falters in its Satire

'The Art of Self Defense' is a movie at war with itself. Though billed as a satiric comedy on destructive hypermasculinity, it lacks the wit and insight to skewer its target with anything approaching a gratifying, substantive critique. At best a cartoonish lampoon, it exaggerates its nerdish protagonist and lacks needed, nuanced development.

In a FILM blog q & a, writer / director Riley Stearns has described it as pro-feminist and anti-toxic masculinity. However, its simplistic, redundant message and two-dimensional stereotypes undercut the commendable intent. The film won’t challenge those who subscribe to exactly what Stearns targets, exactly the danger of such satire.

Here’s the setup. By-the-books accountant Casey Davies, scorned by his co-workers for his auditing of their expense reports, is a total dweeb, perfectly embodied verbally and nonverbally by Jesse Eisenberg. His monotone delivery, altered only in volume, expresses his lack of emotional sensitivity. He’s badly mugged one night by four motorcyclists as he walks home with generic dog food for his dachshund. Thirty-five-year-old Casey decides he wants to be, as he says, “what intimidates me.” After he’s informed he has to await background checks for a handgun permit, Casey wanders into a karate studio where the Sensei (a chilling Alessandro Nivola) promises to “help you become what you fear.”

Game on, with Casey advancing with Sensei’s and other students’ encouragement. Casey will succeed only too well, through off-putting, increasingly brutal, ugly violence that takes over slowly but surely in sociopathic style. The sole woman student notes, “You’ve been taught that compassion is weak” and that “violence equals strength,” as she argues for brutal tolerance and peaceful savagery.

Wirter / director Stearns’ reaction to the dysfunctional violence perpetrated in the name of self-defense, especially involving the use of guns, is crystal clear. But to say that he “wanted to make something that started as a traditional sports movie” mischaracterizes Casey’s trajectory from beginning to end. In addition, without a spoiler here, to say the ending “was just funny,” totally conflicts with my reaction. Stearns says he hopes people laugh at how stupid they are. I hope they realize how important it is to gain perspective, and I don’t see 'The Art of Self Defense' promoting that.