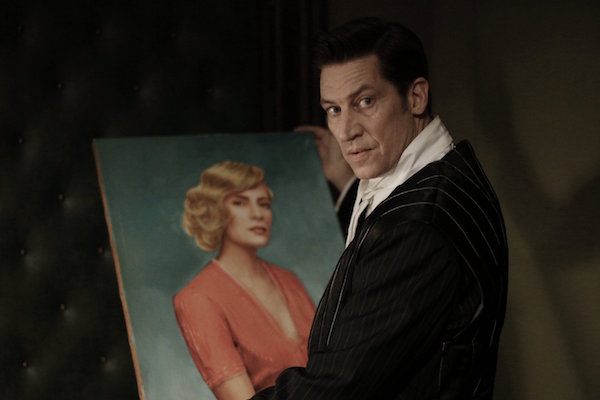 'Therapy for a Vampire' appeals to fans of Undead

If you like vampires, blood, pointy teeth, send-ups, and Dr. Freud, you're gonna clap for Therapy for a Vampire. However, if you've avoided all things undead, including every vampire movie ever made plus Bram Stoker's oeuvre, you're going to have a nice little nap while your vampire-delighted friend chortles.

Therapy for a Vampire makes fun of vampires, but you have to love them enough to laugh at them. Otherwise, you have to have elastic eyes that roll well.

Here's the concept: The year is '32, the place is somewhere near Vienna, the doctor is Sigmund Freud. He has hired an artist, Viktor Huma, to paint his dreams, that is, to illustrate his subconscious. Huma has also been painting his mistress, Lucy, but the dark-haired, bun-sporting, beige-betrousered fräulein appears on his canvas as a fantasy model with curling blonde hair and wearing a coral dress. One of Dr. Freud's new patients is an old guy, a really old count, Geza von Kozsnom. Geza has found that he has nothing left to discover, no thirst for life. Plus, his countess is a demanding woman, who dismisses his bottles of blood -- she wants her neck-piercings fresh. So the good doctor suggests that Geza hire an artist to paint her portrait, since she cannot see herself and since, as he says, he's no good at reflection.

If you get that joke, that pun, you will get Therapy for a Vampire. You will giggle every time the blustery vampire or the vain countess tries the mirror or moves real quick. You will delight in the apposition presented by the real Lucy and the fantasy Lucy. You will slap your knee at the portrayal of Sigmund Freud in his chair, taking notes fast before midnight, as the vampire lies upon the carpeted couch. Otherwise, you will take a nap on your own couch. Now playing at Landmarks' Tivoli Theatre.