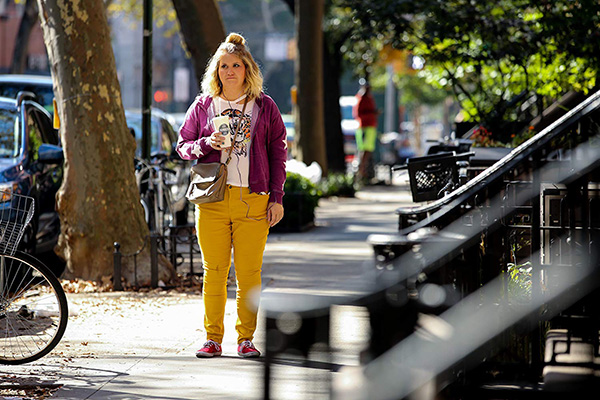 The title character in “Brittany Runs a Marathon” is a mess, and she knows it. If there were any question, in an early scene, Brittany’s primary-care doctor tells her, “You’re unhealthy.” She’s 5’6”, 197 pounds, with a BMI over 25. Because of gym membership costs plus the denigrating insults from her toxic roommate, Brittany decides to take up running.

To prove she’s serious, Brittany sets her sights on the New York City Marathon. The real marathon she’s in, however, involves much more than running 26.2 miles. Brittany needs to learn to accept herself for who she is, to embrace a positive self-image, and to thereby gain respect for others as well as for herself. Brittany must let others into her emotional world, not keep them at arm’s length through defensive humor. That’s a challenge more daunting than the marathon.

There’s a lot to like about “Brittany Runs a Marathon.” It presents an admirable diversity without ever grandstanding about it. Her immensely likable, supportive brother-in-law Demetrius is black. She buddies with and trains with Seth, a young gay man who, with his partner, have a young son the prompt to Seth’s training. And Jern, with whom Brittany shares house sitting duties, looks to be of Indian origin. No big deal or politically correct messaging ever emerges from this. It’s just our world, and welcome.

In addition, as the story moves through a year, Brittany changes incrementally, not in Hollywood style leaps and bounds. She loses some weight (34 pounds) but never becomes Twiggy. She callously lashes out at others, only to acknowledge her own jealousy. Quick-witted and funny, Brittany is likable because she embodies so many insecurities everyone experiences.

As Brittany, Jillian Bell has an expressive face and fine comic timing that keeps the film entertaining, even when several scenes end abruptly. She and Utkarsh Ambudkar as Jern establish a spirited give-and-take that rings true. And Michaela Watkins as running-buddy Catherine has enviable energy while Seamus Tierney’s brightly colored cinematography enhances the mood. Writer/director Paul Downs Colaizzo knows a thing or two about human nature, and he may just encourage a lot more people to establish some realistic goals – to finish not win – and to learn to like oneself. “Brittany Runs a Marathon” screens at area cinemas.

Postscript and full disclosure: I wanted a lot more of the New York City Marathon. In 2009, it was my last of 11 marathons, an experience as blissful as it was painful. I applaud Brittany on every level, especially because she was not a long-time runner as I was and yet she finished the NYC marathon, and this is based on a real, courageous individual. Kudos.