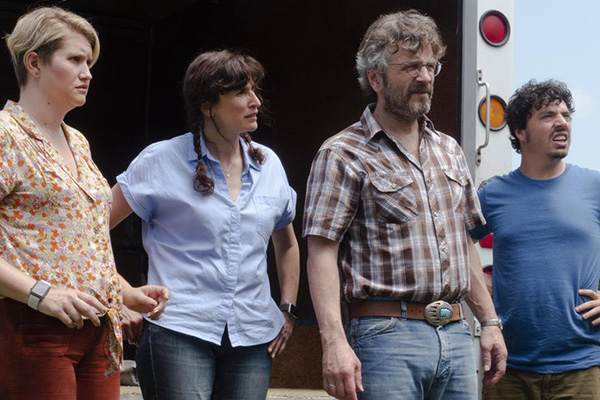 If you go to this movie for the plot, it will fail you. You can go for the fine acting, but you won't find that without squinting. You can go for the scenery. No. Not that unless you like the insides of a pawn shop. You go to "Sword of Trust" for the improvisation, for the quick wit, for the subtleties.

The titular sword is one left to a woman by her grandfather. It comes complete with papers, like a puppy. This sword may have been wielded by Gen. Sherman. Or Gen. Sheridan. It may have been in a battle or two. Or not. Grandpappy was not all that coherent when he wrote the provenance papers – or through life for that matter. But Mary, his granddaughter, and Cynthia, her wife, had hoped to inherit enough to set them up.

Instead, they are reduced to selling the sword to a pawn broker. His name is Mel and he is helped – term used broadly – by Nathaniel. At first, they are not swayed by the women's cobbled story of the Confederate sword. Then, after consulting with a crazy buyer of Civil War weapons, Mel decides to pay good money for this sword, the one of trust thrust on him.

That means all four of these doofuses have to meet the war dork to tell their stupid stories all over again. Hilarity ensues. But do not expect knee-slappers. Expect whispered haggling over a cat pitcher; expect asides that accompany rolled eyes and puppy-like pawing for attention. Delight in the word play, like "Use a glove – have we learned nothing today?"

Lynn Shelton, who has directed episodes of "GLOW" and "The Good Place," directs "Sword of Trust" with care, knowing its limits. She wrote the script with Mike O'Brien to highlight the admirable improvisational skills of the cast: Marc Maron, with whom Shelton has worked on television, and Jon Bass, the hapless Nathaniel; the brilliant Michaela Watkins as Mary and Jillian Bell as Cynthia. Shelton herself appears admirably as Mel's druggie ex-girlfriend.

"Sword of Trust" demands a little patient appreciation for improvisation over plot or characterization or camera angles, but with word play and sword play, "Sword of Trust" is filled with funny.