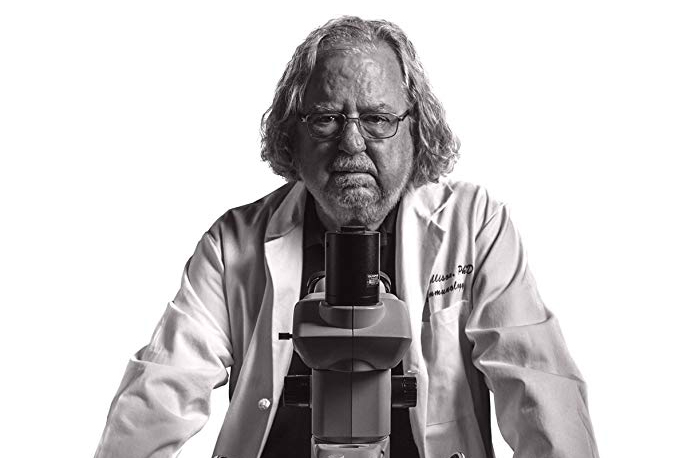 What a pleasure it is to meet Jim Allison in Bill Haney's excellent documentary. "Jim Allison: Breakthrough" starts with Allison playing the harmonica and ends there, too. In between, there's plenty of music, but also a lot of medicine and quite a bit of admirable and rugged persistence.

Allison's research led to a Nobel Prize in Medicine for the amateur musician last year. What it took to reach Sweden was patience, perspicacity, and personality, all possessed by the outlier Allison. He was born, the third of three brothers, in Texas. Their mother died of lymphoma when Jim was 11. He went to schools where evolution was not taught in biology. After he grew up and earned his ph.d. in immunology, it must have felt pretty darn good to him to appear before the leg. in Austin and, ultimately, to defeat a bill advocating teaching creationism in Texas schools.

Haney's film follows Allison as he treks across the country from lab to lab, often taking his loyal assistants with him. He doggedly pursued a cure for cancer, not a chemotherapy but an immunotherapy. Haney, who both wrote and directed, has his parade of talking heads explain the growth of the field of immunology. Those interviewees include Allison's family, absent a brother who died of prostate cancer, and including his lovely ex-wife, lost in the monomania that was Allison's pursuit. They also include colleagues, like the doctor who became his second wife, because, he said, "Who else could I  talk with about T-cells all day?"

Haney augments the narratives with animation of T-cells as the doctors explain the Holy Grail of research in the Seventies, the T-cell receptor. The doctors employ their jargon, but it's still not hard to follow the trails, including through Big Pharma -- here, Bristol-Myers gets a back-pat -- through years without progress, through disparagement. But Haney exposes those realities with the story of Sharon Belvin, diagnosed at 23 with cancer, alive and kicking today after using Allison's drug, called Ipi.

Threaded throughout is Willie Nelson, on stage with the Nobel-prize-winning doc, Jim Allison, two creative outliers who refuse to play the game.