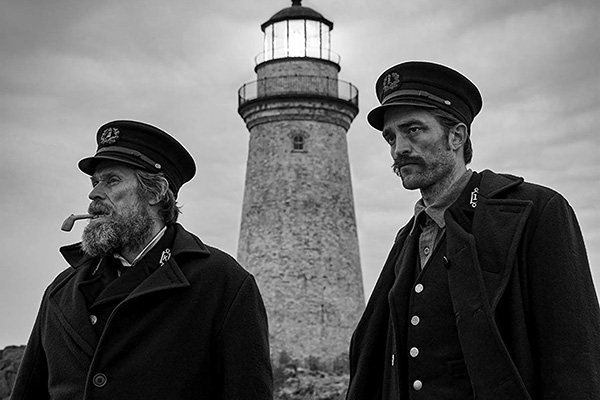 With a haunting foghorn sounding at regular intervals and ominous music signaling dire prospects, a lighthouse slowly emerges from an all-but-impenetrable fog. Two men arrive for a four-week commitment on an island buffeted by storms, their stay defined by the steady psychological deterioration resulting from claustrophobic isolation. "The Lighthouse" thereby presents an intense immersion in the world of two unstable individuals.

Writer/director Robert Eggers impressed horror genre fans with "The Witch," his imaginative debut film in 2015. He reinforces his reputation for creative content and style here as well, co-authoring "The Lighthouse" with his brother Max and shooting in black-and-white in a square aspect ratio, increasing the restrictive spatial entrapment. Adding to that, cinematographer Jarin Blaschke's reliance on close-ups further intensifies the uncomfortable claustrophobic interaction from the first scene to the last as the toll exacted builds to a terrifying conclusion. Used for external shots, situated on the isolated Nova Scotia Cape Forchu, a recreated 1890s architecturally correct lighthouse, complete with spinning Fresnel lenses, adds its own mysterious element.

Set in the late 1800s, the wickie (that is, the lighthouse keeper) is Thomas Wake, a veteran of the job and a hard-driving boss to his subordinate, an ex-timberman who introduces himself as Ephraim Winslow who harbors secrets of his own. Unfamiliar with the superstition that gulls host the souls of dead seamen, Ephraim lashes out at a gull that harasses him, but this is just the first of serious conflicts with Wake and the birds. The two men's relationship, dominated by Wake who resents Ephraim's refusal of alcohol, will progress through a roller coaster of maniacal celebration and unbridled abuse. Mermaid fantasies, sexual indulgence, hallucinatory figures dredged from the sea, and repulsive food define their progressive surrender to unhinged behavior.

The archaic dialogue and exaggerated delivery work because of the inspired performances of Willem Dafoe as Wake and Robert Pattinson as Ephraim. Their action and reactions make their relationship, hurtling toward rage, gripping. They're totally committed, deranged, dangerous, and delightful. Truth be told, "The Lighthouse" is shocking and a lot of fun. For filmgoers interested in the technical aspects of this film, which are fascinating, have a look at the November 2019 "American Cinematographer." In it, the filters used to "emulate the orthochromatic film stock of old" and other technical aspects of the production are detailed in a fascinating explanation of the process.