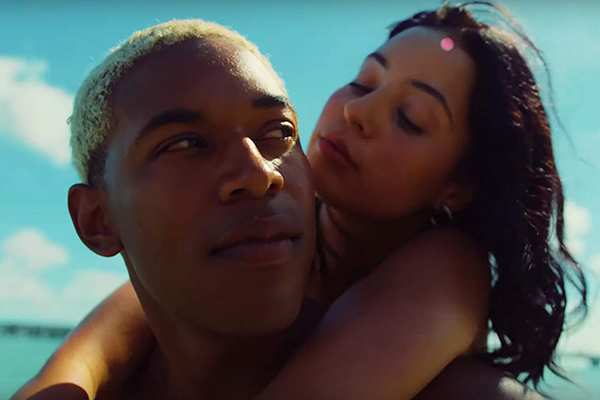 As “Waves” begins, the upper-middle class African-American Williams family enjoys life in southern Florida. But, without conflict and trouble, we’d have a lackluster narrative, so dramatic events quickly ensnare talented, 17-year-old Tyler. Significantly, his demanding, perfectionist father Ronald, who trains with him, clearly expects exceptional performance in Tyler’s wrestling and studies while his mother is more supportive.

Tyler hides his serious shoulder injury, pushing through the pain with drugs, becomes more involved with his girlfriend Alexis, and erupts in volatile, angry outbursts. No spoilers here, but tragedy follows, not a surprise given the almost nonstop, often frantic camerawork; loud, pulsing music; and expressionistic color scheme in the film’s first half. The second hour shifts focus to teenage daughter Emily, becoming romantically involved while still devastated by events, as is the family, all grieving, struggling emotionally. The camera here is relatively quiet, locked down, with more conservative art direction: colors, music, and editing.

In press notes, writer/director Trey Edward Shults describes “Waves” as “about the highs and lows of love—romantic love, familial love . . . and what happens when everything falls apart,” adding, that the title “Waves” points to “an ebb and flow resembling how I think life truly feels at times.”

Great acting heightens the impact. Foremost among the cast, native St. Louisan Sterling K. Brown as the imposing father conveys an intimidating authority. He says he remembers his mother telling him, “I have to be hard on you so the world is not harder on you,” advice he gives his son. As that son, Kevin Harrison Jr. telegraphs the suppressed frustration hiding rage that pressure to always excel creates. During script development, Harrison and director Shults say they based Ronald on experiences with their own fathers. Drawing on that real-life inspiration gives Ronald an immediately recognizable honesty. As daughter Emily, Taylor Russell adds a peaceful, introspective presence, and Alexa Demie as girlfriend Alexis communicates an impressive range of emotions.

To be sure, “Waves” dramatizes many current issues in a powerful, at times difficult story to watch, working from tragic loss through forgiveness to reconciliation. At Landmark’s Plaza Frontenac and Tivoli Cinemas. Check listings.