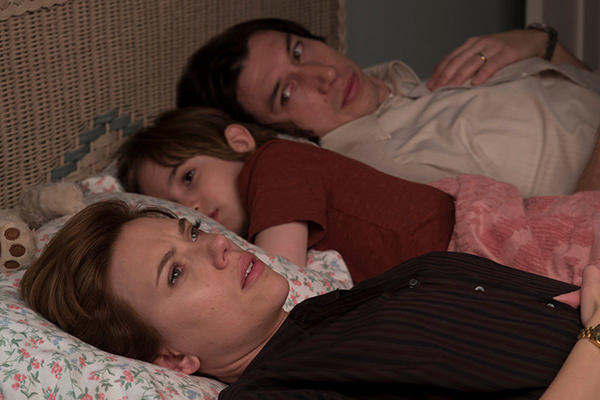 Writer/director Noah Baumbach tackles a most difficult experience in "Marriage Story," that is, the dissolution of an intimate relationship that also includes a cherished, young son. Adam Driver as husband Charlie and Scarlett Johansson as wife Nicole probe and unearth painful emotional territory in a narrative alternately sweet, even amusing, tender, and, ultimately, agonizing.

Charlie is a relatively successful New York playwright, Nicole a theater actress who seizes an opportunity in L.A. as she and Charlie move into divorce proceedings. Lawyers and relatives soon factor in, displaying a range of behavior from supportive to vindictive. As Nicole's lawyer Nora Fanshaw, Laura Dern (who won a Best Supporting Actress for her performance) adds a strident voice to the proceedings, while attorneys Ray Liotta as Jay Marotta and Alan Alda as Bert Spitz provide eccentric but perceptive additions as Charlie's lawyers.

Insightfully written, the film begins surprisingly with Nicole and Charlie reading a list, an assignment by a counselor, of the peculiar but lovable strengths of their spouse, actions described as brief clips present them. This is a unique, clever way to introduce the unique characters: Charlie's competitiveness, Nicole's close familial ties to mother Sandra (a wonderful Julie Hagerty) and sister Cassie (a very funny Merritt Wever). This quick introduction also paves the way for a striking evolution from lovers to friends to enemies, culminating in a fight scene almost beyond belief.

At this year's Telluride Film Festival where I first saw the film, director Baumbach and Adam Driver (absolutely brilliant) discussed this confrontation. They noted that, as spontaneous as it looks, they rehearsed it for two weeks and took two days to film it, a scene that leaves most viewers breathless and terrified in its raw emotional impact. It is laser focused, capturing two individuals who know exactly how to target raw emotions. In the anger and heat of their alienation, neither can resist attacking their one-time partner and defending themselves. It's as honest as it is unnerving.