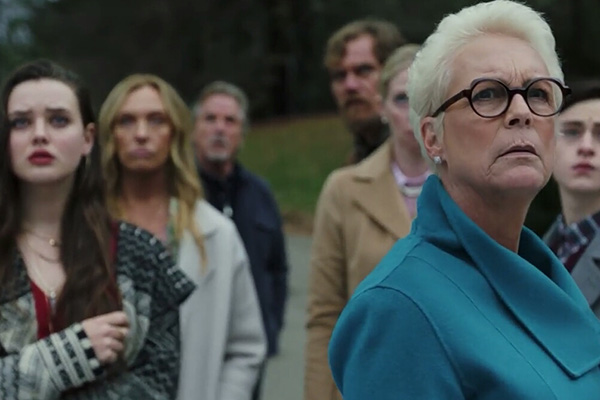 A melange of Mighty Movies always comes out in December, ready for the holidays and for Oscar contention. But sometimes you just wanna have fun. Thankfully, "Knives Out" satisfies this need. It's funny. It's scary. It's murderous. It's clichés blown apart, and it's ensemble acting to a farethewell.

"Knives Out" could be the name of the scene-stealing work of art, a radiant of knives in a sculpture that recalls nothing so much as the artfully arranged armaments in ancient castles. The knives decorate a the home of the mystery writer, Harlan Thrombey. That's a big T in the escutcheon over the door of the house of many gables, inside of which Thrombey meets his maker.

The police call it a homicide, but a detective thinks something's afoot. What is a private detective doing in the middle of this police investigation? Does he have anything to do with the fact that the famous writer had lately -- and essentially -- written his family out of his will. That, by the by, is the political note that writer Rian Johnson adds to the mixture of mystery and comedy, both sneaky. The family is not best pleased by that mournful turn of events. Nor are they pleased about the investigation that ensures, ensnaring each one in turn.

Rian Johnson also directed -- he has credits for "Breaking Bad" and "Star Wars." He has really done himself proud with "Knives Out" as he wrangled a cat-like cast of stars. Included in the remarkable ensemble are Christopher Plummer as the dead guy; and Toni Collette, Jamie Lee Curtis, Don Johnson,, and Michael Shannon as his family. Chris Evans from "The Avengers" stirs the blood. Ana de Armas plays the care-giver from Paraguay (or Guatemala. or Ecuador?); she's an out-lier, for whom lies are an emetic. But, oh!, this shot belongs to Daniel Craig, his blue eyes in focus and his Southern accent in honey. His doughnut monologue proves both his acting skill and Rian Johnson's writing skill.

"Knives Out" is "stoopud" with two 0s, to quote Evans' suspicious character. It's Columbo, as in the TV detective, meets Christie, as in Agatha. It's utterly delightful from beginning to end to juicy pink middle.