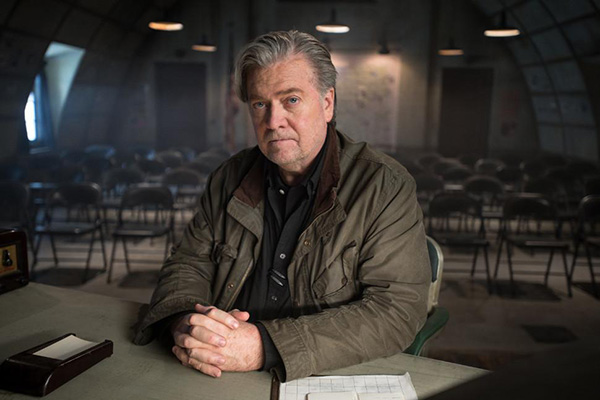 In his latest documentary, “American Dharma,” part of Webster University’s film series, Morris cross examines and interacts with Steve Bannon who transitioned from filmmaker, to investment banker, to executive chairman of Breitbart News, to head of the Trump campaign, and chief strategist during President Trump’s first seven months. On camera for over-the-shoulder shots, Morris stages most of the interview in a Quonset hut, with his usual expressionistic flourishes and solid research, supported by ample archival print and video footage to clarify every detail.

As always, Morris burrows deep into his subjects. Here his laser focus gives Bannon free rein to reveal his guiding principles and strategies, admirable and otherwise, and Bannon serves up some stunning commentary, including his extracting guiding principles from several iconic films, including “Twelve O’Clock High,” “The Searchers,” “Paths of Glory,” and “The Bridge on the River Kwai.” Illustrated by clips from them, Bannon elaborates on the concept of dharma, that is, a convergence of duty, fate and destiny. He references Napoleon and Shakespeare, certain you can’t care about being likable.

He argues calmly but without any qualification or compromise, convinced he's right, that he is a populist and a rationalist, perhaps an apocalyptic one since he knows, given the inequity, a revolution is coming. The fascinating, infuriating Bannon loves the debate and the soap box. “American Dharma” screens at Webster University’s Winifred Moore auditorium three nights, Sunday, December 8, through Tuesday, December 10 at 7:00 p.m. each night. For more information, you may call 314-246-7525 or on the web at: Webster.edu/filmseries.